MAP32: Ultimative Geheimnis (sic; ger. Ultimatives Geheimnis = ultimate secret) is the second secret map of Whispers of Satan. It was designed by Paul Corfiatis, who also wrote the music track for this level, "Evil Incarnate (Remix)". 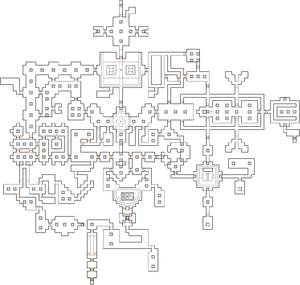 Map of Ultimative Geheimnis
Letters in italics refer to marked spots on the map. Sector, thing, and linedef numbers in boldface are secrets which count toward the end-of-level tally.

The starting room has five doors. The door straight ahead can only be opened via the yellow key, and there are four doors on the sides, two on each side. Get the shotgun and take the lower left door. It takes you to a large room where the yellow keycard is on top of a pillar on a floor that says "WOS". To get the key, head through either door to the south. An arrow points to a blue column, and if you go behind it, you will see a switch. Flip it to lower the keycard.

Head back to the starting point. The quickest way to reach the red key is by going through the north door into the big room. You will see the key and a lot of Wolfenstein SS. Head for the rightmost door in this room, and open it. The next room has four doors, take either left or right one that is on the far side. You will end up in a hallway that surrounds a certain room. Enter this room through any door to confront several Wolfenstein SS. There might also be several barrels hanging around. The switch you want to press to lower the red key is on the western side, guarded by a mancubus. Flip it, and go back to the red key room to get the keycard.

To get the blue key, return to the starting point and take the upper left door. Take the door behind it as well, and then the red door in the hall straight ahead. Behind the red door, there will be a wall of SS to your left, and a door straight ahead, but you want to take the corridor to the right. There will be another wall of SS on this side as well. Also there is an arrow pointing to a door here. Go through this door and flip the switch, which will lower the blue keycard. To reach the blue key, head to the room that had the red key, and head straight north to the red door. The blue key is in the big courtyard dead ahead.

To reach the normal exit, go north through the blue door. You will be confronted by the spider mastermind and some arachnotrons. To open the metal bars guarding the exit elevator, you need to go in both side rooms and flip both switches inside. When you open both bars, a cyberdemon will appear in front of the elevator, being the last thing standing in your way to the normal exit.

To reach the secret exit, make sure you have every key, then go back to the starting point and take the upper right door. Head through the yellow door after that, and then head to the red door you see shortly upon entering. Follow the hallway to a four-way intersection with a rocket launcher in the middle. In order to get the rocket launcher, you must go to the rooms that are to the south and to the east, and flip the switches in both of the rooms there. Although these will allow you to get the rocket launcher, you do not necessarily have to grab the weapon to reach the secret exit. All you have to do is press the switches in order to raise the bridges. Backtrack to the switch that lowered the yellow key, and follow the path outlined by Secrets #2, 4, and 26 to reach the secret exit. Make sure you have all three keys as well, because there are three key doors leading to the secret exit.

* The vertex count without the effect of node building is 4130.