This is the first regular level on console ports to include the super shotgun. It could be obtained previously in MAP57: The Marshes, which is a secret level. 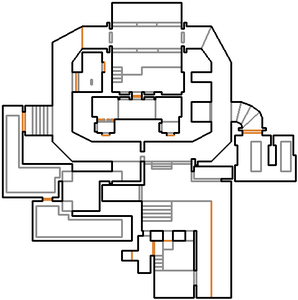 Travel across the river and go up the stairs. Open the small door ahead. Turn left in the small corridor and press the switch at the end. Return to the starting room where a barricade to the east has lowered. Follow the tunnel until you reach a room with a brick structure which is open to the sky. Follow the walkway to the end where there is an opening in the structure, then run forward to jump over the gap into the opening. Climb the stairs, pick up the red keycard and backtrack to the entrance room.

Go through the small door to the south that you entered before. This time, turn right to see some red key bars. Open them and press the switch to lower the western barricade in the starting room. Go through that barrier into the western tunnel and follow it to the end, where you will see a shotgun guy standing next to a barrel and guarding a narrow passageway.

Go through the passageway to a room with two holes in the floor, and drop into the south-western hole (on your left as you enter the room). You will find yourself in a dark passage with several barrels so watch your shots. Pick up the blue keycard at the end of the room and go through the door in the north wall to enter a similar passage. Follow the passage to a blue door, open it and go up the stairs. There is another blue door in front of you; go through it and press the switch in the final room to finish the level.

While following the eastern water tunnel, you will see some stairs going down to a door. Go through this door and follow the room round to find a super shotgun.