MAP32: World of Wonders: The Sea of Radioactive Waste is the second secret map of Perdition's Gate. It was designed by Mackey McCandlish (Avatar).

Plot at the start of the map: You've stumbled upon a world of living rock and it's under Hell's attack! Travel to the end of the world and stop this attack of the hellspawn!

Plot after completion of the map: Good Job! Now the hellspawn have given up on this world, and they're coming after you! Make a run for the teleporter and hope they follow. 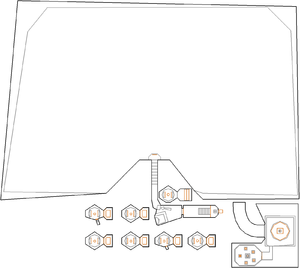 Map of World of Wonders: The Sea of Radioactive Waste
Letters in italics refer to marked spots on the map. Sector, thing, and linedef numbers in boldface are secrets which count toward the end-of-level tally.

You begin where you finished the last map. Head down the stairs back into the darkness and a large arrow will appear guiding you. Head in the direction of the arrow to fall down a hole (this hole is also shown, perhaps by mistake, on the auto map). Head down the long corridor out of the darkness and into the light overlooking an endless sea of nukage.

Pick up all the required equipment here and move between the two lamps to be teleported to a small brown room; the first of seven identical rooms that form a teleporter puzzle.

Entering the correct teleporter in the seventh room will teleport the player to a platform surrounded by radioactive waste. Note the block in front of you.

The player must jump into the radioactive waste, at which point they will sink to the bottom. Quickly pick up a radiation suit and follow the only available exit around to a room containing six pillars, one of which will lower as you enter the room. Run over this pillar to lower another and so on until the fifth pillar lowers revealing a red key on a teleporter.

Entering the teleporter will take you to the platform you teleported into the area on, but with the block removed revealing a switch which lowers the sixth and final pillar in the room the player has just left. Head back there and enter the teleporter that was on the sixth pillar to complete the map.