MAP32: Zoo is the second secret map of The Rebirth. It was designed by Björn Ostmann (Vader), who also composed the level's untitled music track, which is an arrangement of "In the Hall of the Mountain King" by Edvard Grieg. 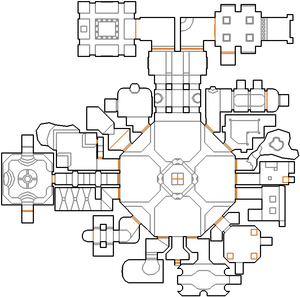 Map of Zoo
Letters in italics refer to marked spots on the map. Sector, thing, and linedef numbers in boldface are secrets which count toward the end-of-level tally.

An arachnotron and a mancubus are stuck in a dummy sector that is unreachable in the map, preventing 100% kills by conventional means.

* The vertex count without the effect of node building is 1379.