MAP33: Chocolate is the Easter egg map of Plutonia 2. It was designed by Eric Baker (The Green Herring), and uses the music track "Wasteland" by James Paddock. The par time defined in MAPINFO is 2:00.

The level cannot be reached in normal gameplay, although it appears in the fourth built-in demo if you are using the Final Doom version of Doom II v1.9. (See Accessing the level for how to play it.) Its design, especially the beginning, is reminiscent of MAP02: Well of Souls from The Plutonia Experiment.

With the Final Doom version of Doom II v1.9, add -warp 33 to the command line, or type idclev33 during gameplay. It does not appear to work if you are using the regular v1.9 distributed with Doom II. Note that completing this level with the original engine causes the game to crash, preventing you from seeing the intermission screen.

On Chocolate Doom (using the command line parameters -deh pl2.deh -gameversion final -iwad plutonia.wad), idclev33 works but the automap displays LEVEL 1: ENTRYWAY. On completing the level you see the intermission screen, but the line giving the level name is missing ("FINISHED" is line 1 instead of line 2 as it should be) and on pressing the key to go to the next level, the program instead bombs back to Windows with an error dialog saying "Bad V_DrawPatch". On ZDoom, the level (including the intermission) works as one might expect, except that pressing the key to end the intermission sends the player back into MAP33.

The behaviour of various Doom ports on exiting the intermission is probably explained by this WAD's MAPINFO lump; it has an entry for MAP33, but the NEXT and SECRETNEXT lines (which are supposed to tell the engine where the two types of exit go to) are missing. 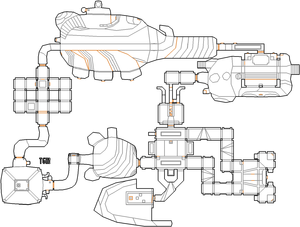 Map of Chocolate
Letters in italics refer to marked spots on the map. Sector, thing, and linedef numbers in boldface are secrets which count toward the end-of-level tally.

Flip the switch dead ahead and kill two shotgun guys as you descend. At the bottom, kill the chaingunners and then open the door, killing a few more monsters. Pressing the switch at the end reveals a lot more monsters in a valley to the east. Pick up the super shotgun and head into the next door. There are a number of enemies here. You can elect to kill off the caged monsters now, or wait till later. Either way, keep going through the shafts until you find a large brown pit with two lion switches. Press the one on the left first, and then the right. Lower the bridge that appears after pressing the right switch, then ride it up. Flip the switch at the other end to open up more of the shaft, and keep going. You will appear on the other side of the gap from where you first entered the shafts. Click the switch here, and the door behind you will open with Hell knights and the yellow skull key. When you pick it up, a bridge raises connecting to the other platform you were on, and some revenants will appear as well. Note that picking up the key also crushes the caged enemies as well, which may have saved some ammo if you elected not to kill them yet. Behind the revenants is a path leading to a blue bar, which leads to the exit, but you cannot go there yet without the blue key.

Instead, head back the way you came, all the way back to the starting point, killing the cacodemons along the way. When you reach the starting point, you will find that it has sunk deeper, so drop down and kill the chaingunners guarding the yellow door. Open it, and then follow the path to some more shafts. In there, you need to press two lion switches to progress forward, which should not be too difficult except for the monsters standing in your way. When you have pressed both, the way northward will be revealed with an arch-vile and shotgun guys guarding the next door. This one spills out into a very large monster-filled valley. Get rid of the opposition, then press the lion switch near where you entered the valley. Quickly run eastward, towards the rock with a lion switch up top, and you should rise up to it. Pressing this switch causes some rocks to form stairs nearby. Climb them and flip the switch, looking out for the ambush that springs up just before it. The arch-vile in the cage there can be killed now or ignored for later. Head for the southeast corner of the valley, where another lion switch functions as a lift. Ride it up, and then step onto the rocky ledge for a wall to the left to open. Kill the imps and press the switch to access the next ledge. You actually need to repeat this two more times, then press the switch at the top. This opens up more of the valley, where demons will run down.

Open the door at the end and flip the switch to lower a lift with a baron of Hell. Ride it up and dispose of the monsters, then open the next door. In the metal room that follows, the red skull key is straight ahead. Flip the switch on the west wall to lower the northeast lift. Ride it up and then flip the switch for the northwest lift. One more switch press at the top will raise the steps to the red skull key. Shoot the skull switch outside the window behind the key, then jump out the window to the west. Some platforms will rise out of the muck while cacodemons attack you. Fend them off and open the red door on the other side. Get rid of the revenants, and drop into the opening where you will find the blue skull key. Press the skull switch ahead and you will end up back where you found the yellow key, with a cyberdemon and Hell knights in this area. With the blue key, you can now open the blue bar to the south. Kill the chaingunners and exit the level. 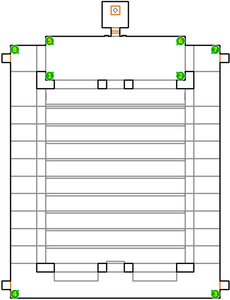 This is one of two maps in Plutonia 2 that contains a separate arena for deathmatch. The other one is MAP22: Locus Perditus.

The deathmatch section of this level is based on MAP28: Valley of Contamination from 32in24-6, which was a Boom-compatible WAD. To fit this area under the limits of the original engine, all of the surrounding detailing was removed. In addition, the exit switch was replaced with the standard Plutonia teleporter for consistency.