MAP33: Credits is the first secret ZDoom-only map of Whispers of Satan. It was designed by Paul Corfiatis and uses his music track "Running from Evil (techno remix)".

This level cannot be reached during normal gameplay, although it can be by typing IDCLEV33 during gameplay, or adding -warp 33 to the command line.

Completing this level takes the player to MAP01: Sintlabs. 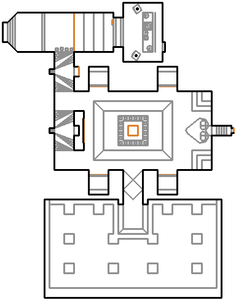 Map of Credits
Letters in italics refer to marked spots on the map. Sector, thing, and linedef numbers in boldface are secrets which count toward the end-of-level tally.

There is a black and white poster of Paul (left) and Kristian (right) in the main room.

The drawing of the two DJ's found in the northern part of the level is actually a drawing of Paul himself DJing with another person. Paul is on the left in the black, red and white costume and is dressed up as his alter-ego rapper named Dave.

When you reveal the DJ's, a BFG teleports in and you hear a sample of Borat saying "You will never get this lalalalala"

The music is a techno remix of Doom 2's MAP01 song, Running From Evil originally composed by Robert Prince. Paul rewrote the entire song from scratch.

There are no official secrets.

To exit, fist Cybie and press the switch. Cybie is a special dehacked version of the Cyberdemon with a higher pain chance and different sound effects which replaces the Dead Lost Soul.

You can also exit the level via an arch-vile jump over the exit bars if you release the arch-viles. You will be killed as this happens and sent to MAP01 with 50 bullets and 100% health.