MAP33: CyberSweeper is the bonus level of Eternal Doom. It was designed by Jim Flynn and uses the music track "Cyber Hunt". It is contained in a separate WAD file CSWEEPER.WAD, which must be loaded along with ETERNAL.WAD. It occupies the MAP01 slot. 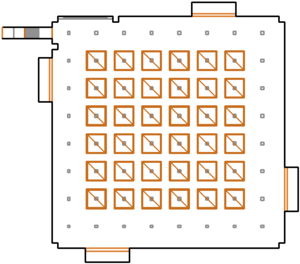 CyberSweeper is a Doom-styled recreation of the prominent puzzle video game Minesweeper. It features a six-by-six board with a number of cyberdemons distributed on it instead of mines. There is an additional outer ring of squares, making the total grid eight by eight. This outer ring is full of blank squares that give the player the initial hints they need to solve the puzzle, rendered as transparent linedefs that indicate the number of adjacent cyberdemons with digits on their middle textures. Pressing the use key while against a square will lower it, revealing either another hint and a health bonus or a cyberdemon. Every safe square must be cleared in order to finish the level. Successfully clearing all non-cyberdemon squares grants access to a teleporter that allows you to telefrag the still-resting cyberdemons.

If played on top of Eternal Doom without using the shell, the level will have only eight cyberdemons in a fixed arrangement. The Eternal Doom package includes an utility, RANCY.EXE, which can be used to randomize the cyberdemons' placement for each subsequent playthrough. This program runs whenever Cybersweeper is played through the Eternal Doom shell. Additionally, your choice of skill level through the shell determines how many cyberdemons are placed on the board: eight for ITYTD, twelve for HNTR, fourteen for HMP, sixteen for UV, and eighteen for NM. 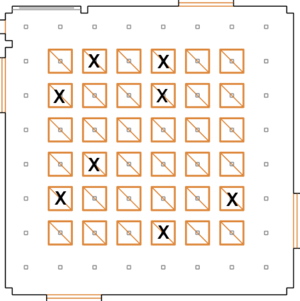 Open the double-doors on all four sides of the map to reveal a chaingun, super shotgun, rocket launcher, and plasma rifle with a good portion of ammo. These armaments should give you some leeway if you make a mistake and reveal a cyberdemon. Use the hints given to clear the squares, leaving the trapped cells alone. When you grab every health bonus from the safe squares, a door to the northwest will open. Walk through to trigger a series of teleports and telefrags, killing all cyberdemons, afterward depositing you back at the exit.

* The vertex count without the effect of node building is 830.