MAP33: Hexsoil is the thirty-third map of Doom 2 the Way id Did, and is a secret level included as a parody of MAP33: Betray. It was designed by Blackgaze as a serious attempt at a late-progression Hell-themed level. It utilizes the music track used for the text screens. It was, however, planned to use "Getting too Tense" from Doom II, according to the MAPINFO lump of its original release.

It can be accessed from MAP02: The Compound as long as the user is using a compatible source port such as ZDoom or the Eternity Engine. While many others can load the level using the idclev33 cheat code or the -warp command line parameter, finishing the map may cause the program to crash afterwards. The par time defined in MAPINFO is 7:00 (8:00, in the original release).

Unlike other maps in Doom 2 the Way id Did, this map requires a limit-removing source port to successfully run, as the usage of most textures causes the tutti-frutti effect in vanilla Doom and Chocolate Doom, and will even bomb out with a visplane overflow in the large cavern beyond the yellow locked door. Additionally, Chocolate Doom incorrectly titles the map as Level 1: Congo on the automap. 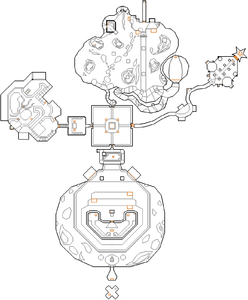 Map of Hexsoil
Letters in italics refer to marked spots on the map. Sector, thing, and linedef numbers in boldface are secrets which count toward the end-of-level tally.

Inside the small closet you are, get the shotgun and other goods. Press any of the four skull switches. Now, there are four bridges to walk on but you can use the western one yet.

Use the western bridge in the starting area and open the door. Drop down and use the stairs to get to the door at the top. In the next hellish hall use the stairs to your left (south) and at the end drop down to get the hall with tan ground. Go around the corner to the western part. Pick the super shotgun and dispose of enemies and press the eye switch. This one lowers the barrier blocking your way to the northern staircase. Now, get back a bit to the east to find the staircase revealed. Use it grabbing goods on the steps. At the top, pick up the blue skull key. However, this will open caves containing monsters. When you get rid of them, open the blue bar in the south part of the area. Press the blue switch to lower several walls as long as the one near this button. Kill the sergeants and use the teleporter at the fiery closet to get to the starting place.

Now, when you possess the blue key, in the starting area, use the southern bridge and open the blue door. Take the radiation suit and drop down to find yourself in a nukage maze. In the maze head left, right (south), right (west), right again (north) and left. Press the skull switch to reveal a closet in the center of the maze. If you grab the soulsphere you will reveal the southern outside area. Go outside and get to the very top of the central structure by using lifts three times. At the top, you can see a slime fall inside which there is a teleporter pad. Use the door to enter inside where you can see two teleporter pads. Use the western one to find yourself in the cage. Proceed along the cage until you reach a small library. There, press the gargoyle button to pour out some nukage of the nukage fall in the outside. Use the teleporter to get out. Reenter inside and do all the same that you have done but this time use the eastern teleporter pad. When you finish, the slime fall will be out and you can enter the teleporter that was inside to get to the large alcove in the same area. From the west (or from the east depending of what side of teleporter you have entered), get to the extreme south of the alcove killing all of the disturbing imps. In the south press the eye switch to lower the yellow key pedestal. This will also lower several platforms containing enemies in this area. Grab the key and escape through the fiery closet at the south using the teleporter.

With the yellow key use the northern bridge and open the yellow door in the starting place. Drop down to find yourself in the rocky mines. Walk through the small tunnel towards the north. In the large lava area drop down and follow small rock mounds above the lava to safely get to the extreme north of this area. Use the platform. Open door and press the eye switch at the very end. This will lower the pedestal with red key as long as unleash many monster to the lava area. Leave this room and open the red key bars. Using the bridge get back to the south of the area. Walk upstairs to get the closet at the top. Enter the closet to find yourself in the cave. Proceed along the cave until you reach curved word on the floor. If you look at the ceiling you notice the inscription "RUN" which means that you have to run quickly into the teleporter pad. Actually, when you step on the floor of this area, two alcove on either sides will open that contains enemies. When you have done with them escape by the teleporter.

Possessing the red key use the eastern bridge. Open the red door and drop down. Proceed through the cave killing enemies until you reach the room in the north-east with several columns and a skull switch in the end. Press the switch to pour out the blood falls on either side that contain arch-viles or barons as long as switches to lower barriers leading to the exit. Press all of these switches then proceed towards the exit and enter the exit teleporter.

* The vertex count without the effect of node building is 2574.