MAP33: Malle Brok is the first map of the No Hope For Peace episode of Doom 2 Unleashed. It was designed by Christian Hansen and uses the untitled music track from Doom's E2M9: Fortress of Mystery, composed by Robert Prince. 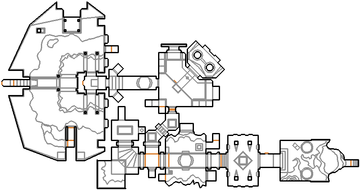 Map of Malle Brok
Letters in italics refer to marked spots on the map. Sector, thing, and linedef numbers in boldface are secrets which count toward the end-of-level tally.

Take the shotgun on your left then climb the stairs to the top, killing a zombieman and imp on the way. Lower the lift at the top of the stairs and kill two waiting shotgun guys, then ride the lift up to the top floor and follow the passage to a silver door guarded by a demon. Go through the door to see the blue keycard on a pillar guarded by two imps, shotgun guys and lost souls, then turn left and follow the tunnel until you drop into a small chamber containing a chaingun and two boxes of bullets. Flip the switch to lower the walls to your left and right, then go outside and head west across a gray bridge to find another switch at the bottom of a staircase.

Flip the switch and go back up the stairs to find that the bridge has lowered; turn right and you will see a Hell knight coming out of an opening in the rocks. Kill the knight then run across the lava into the opening, then follow the green path to a lift and ride it up to a small tunnel. Run forward so that you jump over the lava and land on the other side of the bridge, kill the pain elemental that is revealed ahead of you then backtrack to the blue key room - the pillar holding the key has lowered, allowing you to collect it by walking round the pit. Watch out for one or two revenants that have appeared behind a fence, and any lost souls hiding at the bottom of the pit.

With the key, go back to the lift near the start point and ride it down to the bottom floor. Head across the bridge to collect an armor, watching out for a cacodemon that is revealed on the right, then open the door ahead to confront two knights and another cacodemon (plus two chaingunners on Hurt Me Plenty (HMP) skill level or higher). Step into the lift that the cacodemon emerged from and flip the switch on your left to lower the floor, then head forward into a dark tunnel with corpses to finish the level.

After lowering the pillar with the blue key, return to the blue key room to find that part of the east wall has lowered allowing you to collect two boxes of bullets and a medikit.

* The vertex count without the effect of node building is 1784.