MAP33: Nil is the thirty-third map of Claustrophobia 1024. It was designed by Brett Harrell (Mechadon), and uses the music track "Chimes of Death" by James Paddock (Jimmy). 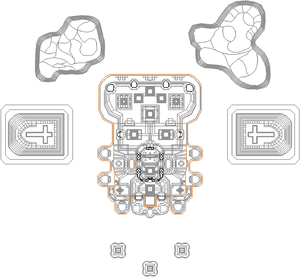 Map of Nil, cropped to only show the playable area
Letters in italics refer to marked spots on the map. Sector numbers in boldface are secrets which count toward the end-of-level tally.

* The vertex count without the effect of node building is 7122.

This level was obviously inspired by MAP32: Nullspace Junior of Congestion 1024. Both maps are set in a black space void and feature medieval-style architecture. The starting areas are also very similar: both levels put the player in a small closet with a switch that causes the floor to rise, and the starting sector is tagged as a secret in both maps. However, compared to Nullspace Junior, this level is somewhat harder, containing many more enemies and therefore suggesting a more offensive approach.