MAP33: Pre-destined Mortality is the first bonus map of Hadephobia. It was designed by Márton János Kapuvári (Cell) and uses the music track " ". 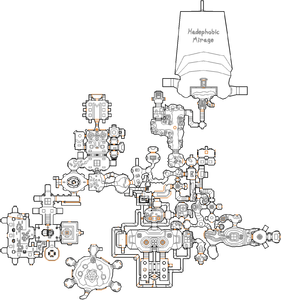 Map of Pre-destined Mortality
Letters in italics refer to marked spots on the map. Sector numbers in boldface are secrets which count toward the end-of-level tally.

This is a pretty confusing map, so be aware that there may be additional critical points, or conditions to open or shut secrets, which are not mentioned here as they didn't attract the author's attention.

* The vertex count without the effect of node building is 16148.

Since this bonus map is not part of the regular level sequence, you may access it in two ways: