MAP33: Revoltlover is the bonus map for Revolution! that is included with the Revolution! MIDI Pack. It was designed by Thomas van der Velden (t.v.) and uses the music track "Evil on Tour," composed by Gus Knezevich (Alfonzo) and James Paddock (Jimmy), though this track will only play in a source port that supports MAPINFO (see technical information). The par time defined in MAPINFO is 30 seconds. 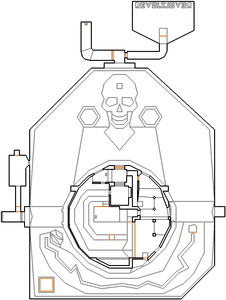 Map of Revoltlover
Letters in italics refer to marked spots on the map. Sector numbers in boldface are secrets which count toward the end-of-level tally.

In vanilla Doom, and source ports that do not allow for changing the music lump assigned to a given map, any map that occupies the MAP33 slot will use the music that also plays on the story text screens. In these cases, the music track for this level is "Why Settle for Colonel?" by Zan-zan-zawa-veia.

The development of the Revolution! MIDI Pack caught the attention of Thomas van der Velden, the original author of Revolution! After discussion with project leader James Paddock, van der Velden contributed not only a TITLEPIC for the MIDI pack, but a new map to be included in the WAD, as well as custom text screens, which were originally left unchanged from Doom II.