MAP33: The Unknown Machine is the first bonus map of Claustrophobia 1024 2. It was designed by Joonas Äijälä (Jodwin) and Steve Muller (Kyka), and uses the music track "". 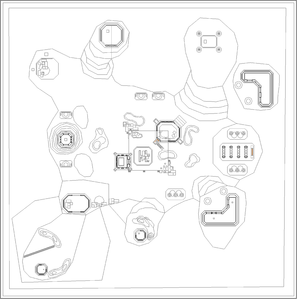 Map of The Unknown Machine
Letters in italics refer to marked spots on the map. Sector, thing, and linedef numbers in boldface are secrets which count toward the end-of-level tally.

This map consists of one huge open area with the 1024x1024 playable zone in its center, and various structures scattered around. The rest of the map is blocked off from the playable zone by fences and several other obstacles (crates, buildings etc).

From your starting point, you can spot a switch ahead and slightly to the left of you. Collect the initial supplies and shoot the switch. Now all you have to do is to survive for about 10 minutes. During this time, many monsters will be spawning in outside of the playable zone. This map has the largest amount of monsters compared to any other map in this PWAD (500, regardless of the difficulty). They will not appear all at once but rather in multiple waves. Most of them will remain outside and fire at you from beyond the fence, but cacodemons will be able to cross into the playable zone. Some enemies will also be appearing on the ledge in the northeast corner of the zone (you can't get up there though). During the fight, additional supplies will be spawning in around you to help you in the fight, consisting of new weapons, ammo, health, and armor.

The initial wave is perhaps the hardest because you don't have the super shotgun yet. The following waves will not be much easier, however. There is no spot where you can protect yourself against attacks from every side - keep moving, or you're dead meat. The good news is that there won't be any arch-viles or pain elementals. A cyberdemon will appear at a later stage (only on HMP and above), and if you're successful in instigating infighting, you can have it draw a lot of fire on itself, increasing your chances of survival. Just watch those rockets!

At some point in time, the switch that you shot in the beginning will reappear. Press it to kill a hidden Icon of Sin and end the level. Once you've pressed the switch, the level will end even if you die later on, but if you're still able to hold the line, you may want to kill the remaining enemies to get 100% kills. Beyond that, there are no items or secrets to collect.

* The vertex count without the effect of node building is 3922.