MAP33: Town is a level in Strife. It uses the music track "Tavern". It is an earlier version of MAP02: Town which was originally featured in the demo version of the game. In the original commercial release of Strife, this level cannot be successfully completed due to missing resources. In the 2014 re-release of Strife: Veteran Edition, it is completable and can be selected as an episode from the main menu when beginning a game. 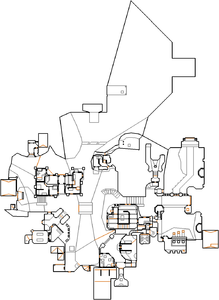 Map of Town
Letters in italics refer to marked spots on the map. Sector, thing, and linedef numbers in boldface are secrets.

You begin in a waste disposal room, facing an acolyte (or two on Veteran skill level or higher). Kill them with the punch dagger and take the passcards they drop, take the items in this room and open the door at the west end (another acolyte will be behind it on Elite or Bloodbath), then turn right and go through the door on your left to find Harris. He will ask you to collect the offering chalice from the town's sanctuary and bring it to him at the tavern.

Leave the room and turn left, then left again to leave the sewage plant. Turn left and go down two sets of steps, then turn right at the bottom to see a sign for the sanctuary in front of you. Go through the door next to the sign, then head into the passage on your right to enter the sanctuary.

Instead of talking to Harris, kill him and a button will be revealed. Press this button to lower a staircase and follow it down to a small room containing, among other items, a blue ID badge and a communicator. This will put you in contact with BlackBird, who tells you to drop the chalice and leave the tavern; do so. Outside the tavern, BlackBird will instruct you to find a flamethrower in the governor's mansion. Drop off the ledge and turn left to see the mansion ahead, guarded by red acolytes. Approach it and go through the door flanked by torches. Inside, turn left and go through the door guarded by another acolyte, then follow the tunnel to a room containing the weapon you need as well as other items. As you enter, the alarm will sound.

Collect everything here and leave the room; BlackBird will tell you to watch out for large robots called crusaders. Use your new weapon to incinerate the acolytes in the mansion, then head outside. One to three crusaders will have teleported into town depending on skill level; activate the environmental suit you picked up, then get close to the crusaders and destroy them with the flamethrower (the suit will protect you from the crusaders' own flamethrowers). Once the robots are destroyed, activate the shadow armor as a large number of acolytes will be teleporting into town.

From the governor's mansion, head north and cross the bridge spanning the river. Turn right and head through the tunnel between the shops, then turn left as soon as you get outside. Go through the open door in front of you and step into the teleporter here to reach the Movement's base.

Major differences from the final version of the town include:

Two door tracks in the power station exit area have door actions assigned which can crash the game if pressed. This area is normally only accessible by using the no clipping cheat code.

Due to missing log and voice resources, this map cannot be completed in the original retail version of the game. The game will bomb out with a W_GetNumForName error message during the initial dialogue with Harris.

Voice and log numbers on comm unit linedefs were not updated and conflict with voices and logs used by the registered version's levels, leading to nonsensical statements by BlackBird.

A water bottle (Thing 47) has no flags set for any of the three difficulty classes, so it does not actually appear in the level.

* The vertex count without the effect of node building is 2387.