MAP33: Uncharted Waters is the thirty-third map of Project Einherjar. It was designed by Mike MacDee (Impie) and uses the music track "". 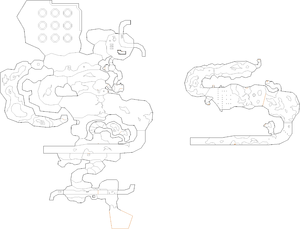 Map of Uncharted Waters
Letters in italics refer to marked spots on the map. Sector, thing, and linedef numbers in boldface are secrets which count toward the end-of-level tally.

If you approach the bridge that leads straight to the silo, it explodes and collapses courtesy of Admiral Wulfgard. Juno must instead grab an outland suit and dive under the frozen river which would otherwise freeze her to death. The map is centered around lowering clusters of sea mines in order to reach the next surface area.

Before you reach the first line of mines, duck into the cave to your left and surface. Kill the Jotuns here and hit the switch to lower the mines. You can go round to the other cliff and snipe the enemies in the next surface area before diving back underwater.

There are two more ladders to the surface before the next mine blockade. Use the first to reach the truck yard (the stairs to the next mine switch are accessible here, but they're blocked), where the exit switch is locked behind a red door, and the missile silo is ominously visible beyond a fence.

Approaching the second surface ladder causes a Scubajar to appear and attack: kill it before surfacing and opening the blocked stairs. Go back to the previous ladder and up the stairs to lower the mines.

Next is a huge minefield that must be carefully navigated so as not to detonate any of the mines: one is usually enough to splatter Juno like a tomato. On the other side is a long grotto leading to another ladder, and another Scubajar boss. The ladder leads to the yellow key that opens the way to the minefield switch: flipping it disposes of the mines and reveals a third Scubajar guarding another ladder, which leads to the storage area where the red key is guarded by the Hreidmars. Grab it and run to the truck yard exit switch.

This map was largely inspired by the WolfenDOOM adventure Operation: Arctic Wolf, which makes regular use of underwater sequences.