MAP33: Voodoo Magic is the first map of the All Hope for Terror episode of 2048 Unleashed. It was designed by Paul Corfiatis and uses an untitled music track, also made by Corfiatis. 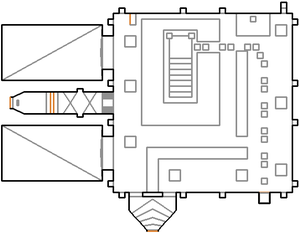 Map of Voodoo Magic
Letters in italics refer to marked spots on the map. Sector, thing, and linedef numbers in boldface are secrets which count toward the end-of-level tally.

You start in a seemingly empty courtyard. Cross the floor and flip the switch in the opposite corner, which will cause walls and nukage trenches to appear throughout the courtyard along with a number of items and monsters, including two demons and a chaingunner as well as a varying number of imps and Hell knights depending on skill level. Collect the super shotgun near the switch then head up the stairs near the middle of the courtyard and turn right at the top to see a series of wooden poles - carefully step across these to a teleporter which will put you on top of a wall that you can follow to the blue skull key. With the key, go to the west wall of the courtyard and go through the archway here to a door requiring the blue key; open it and kill two cacodemons then step through, pick up the rocket launcher and flip the switch here to finish the level.

After flipping the first switch, look in the south-west corner to find a shotgun guarded by an arch-vile.