MAP34: **NULL** is the thirty-fourth map of Claustrophobia 1024. It was designed by Brett Harrell (Mechadon) and uses the music track "Claustastrophe" by James Paddock (Jimmy). 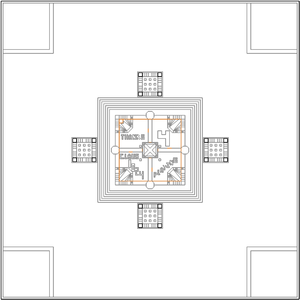 Map of **NULL**
Letters in italics refer to marked spots on the map. Sector numbers in boldface are secrets which count toward the end-of-level tally.

A teleport destination is missing from sector 218, which makes it impossible for one of the four arch-viles (Thing 341) to teleport in, rendering 100% kills unattainable.

Additionally, entering the exit teleporter causes the player to die, but the level does not actually end. It may, however, be an intentional setup, seeing as this is a bonus level not included in the main progression.