MAP34: 1994 Revisited is the second secret ZDoom-only map of Whispers of Satan. It was designed by Paul Corfiatis and uses his music track "NES Batman Stage 3 (lower pitch remix)".

Completing this level takes the player to MAP16: Undervilla. 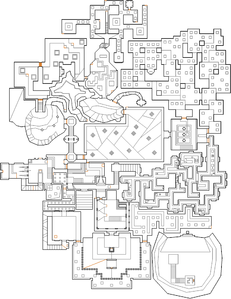 Map of 1994 Revisited
Letters in italics refer to marked spots on the map. Sector, thing, and linedef numbers in boldface are secrets which count toward the end-of-level tally.

When you head around the counter at the beginning, a room full of imps appears behind you. Hit the switch in this room to lower the crate containing the shotgun and continue with the level. Head up the stairs in the next area and flip the switch to lower the way eastward. The stairs have lowered revealing several former humans and two doors. The door on the right requires the yellow key, so take the one on the left. You will see the yellow key trapped behind some bars in the next room, so go down the stairs and follow the path to the outside area. Climb the steps up to the next door and follow the gray walkway all the way to the next door. In this next room with crates and red/blue floors, maneuver around the crates, going north and heading downstairs to an orthogonal green base. There are five switches you need to press to open the door in the crate room, so you need to go to the around this place, finding five switches to press. The good thing is that they are lit up so you can find them better. You still have to fight monsters as you are finding them though.

When you press all five switches, the barricade that was at the entrance will be open, and an arch-vile will come out of it. Press the switch at the end to open the southern door in the crate room, then go back there and through the door. You will find some silver barriers at the top of the steps, so instead of going that way, head into the opening to the northwest. You will need to traverse the walkway counter-clockwise around the black void, being careful not to fall in at the breaks in the fence. Flip the switch at the end to lower the barriers at the top of the steps, then head back there and open the door into a very large room. In this room are demons, imps, lost souls behind cages, and barrels. Get to the bottom of this floor and open the door to receive the yellow skull key. The bars will lower, allowing you to open the door ahead and then open the yellow door that you could not open before.

Maneuver through the fences and climb the stairs in the next room. You will see the red skull key on a box ahead as well as the red door to the east. Go north of that door to a walkway and open the door to reappear in the very large room, this time behind the cages where the lost souls were. Go all the way to the end of the caged area, ignoring the door you saw. The switch at the end will open that door, so hit it and head through. In the next room, kill the imps and arachnotrons and head towards the two doors at the east end. Take the left one to enter a huge area with a ton of former humans. You will need to traverse this area and continually ascend until you find a door with barons of Hell nearby. Open this door and you will be able to grab the blue skull key. Drop down and take the blue door now.

The next area is a crate maze with a lot of Wolfenstein SS. You need to traverse this maze while heading westward. When you see the mancubus, you are heading in the right direction, so go down the path and flip the switch to obtain the red skull key. Now open the nearby red door and follow this path around and up to a room with two switches. Hit both of them and then navigate the sewer all the way to the switch. Flip it and then go back to the door you passed to enter a gray station-like area with a plasma gun. Ascend by climbing the steps around the structures until the big structure opens up revealing a cyberdemon. Kill him and flip the switch in his compartment to open the northeastern wall to the passage with spectres inside. Head all the way to the other side of the passage and open the door into a rocky area with imps. Keep following this path to a switch and flip it to open the door into the lava. Cross to the other side and follow this path all the way to a switch. Flip this one to open the way back to the hallway before the red skull key. Now backtrack to the gray station area that had the plasma gun, and you will find the exit door in front is now open. You will teleport into an area where an Icon of Sin is directly in front of you. Grab the weapons and head up the stairs with the "27" in front of it. Flip it and this will damage the Icon of Sin eventually ending the level. You will have to wait it out for a while when this happens.

* The vertex count without the effect of node building is 4154.