MAP34: Devil's Lighthouse is the second map of the All Hope for Terror episode of 2048 Unleashed. It was designed by Walter Confalonieri (daimon) and Gustavo Rehermann (Gustavo6046), and uses an untitled music track by Paul Corfiatis. 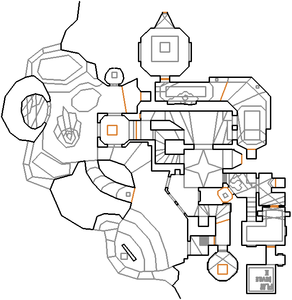 Map of Devil's Lighthouse
Letters in italics refer to marked spots on the map. Sector, thing, and linedef numbers in boldface are secrets which count toward the end-of-level tally.

Follow the passage and kill any zombiemen blocking the way to find a room with a red cross-shaped floor. Go north-west into a passage with health bonuses and follow this into a room with crates, then turn left and left again into another passage and flip the switch at the end. Return to the red cross room and flip a switch that has been revealed in the north-east corner to open the silver door next to it, then go through and follow the path past some zombiemen and shotgun guys to a teleporter which you need to step into. Kill the shotgun guys ahead then follow the hallway round the corner to the exit door, which requires the red key - as you approach the door you will cross a walkover line that reveals a teleporter by the starting point.

Backtrack through the teleporter near the exit door to be sent to a white pad near the starting point, then turn right and step into the red teleporter ahead of you to get outside. Head forward and you will see a wall open in front of you to reveal two lost souls and a revenant - kill them then turn left and head straight forward up a set of steps to the red skull key. Retrace your steps to the exit door (the quickest route is via secret #3), watching out for a Hell knight and other monsters that have teleported in to the level. Open the exit door to confront a chaingunner (plus a cacodemon and two shotgun guys on Ultra-Violence and Nightmare skill levels) then press the switch at the back of the room to finish the level.

When you cross the line that opens the teleporter by the start point, you will also open a large silver door next to the first switch you pressed. Behind this door is a chaingun and four clips - watch out for imps that appear outside and can attack you through the windows.

Linedef 1208, bordering the brown depression in the outdoor area, has no texture, resulting in a minor hall of mirrors effect.