MAP34: Horseshoe of Death is the second bonus map of 1000 Lines 2 - Community Project. It was designed by Diego Villarroel (DJV) and, by default, uses the music track "1000 Lines 2 Main Theme" by Tristan Clark. As this is a very short loop, source ports that support the MAPINFO lump will instead use the music track "Forest of Concrete" by Damian Lee (Lexus Alyus). 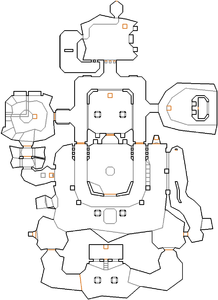 Map of Horseshoe of Death
Letters in italics refer to marked spots on the map. Sector, thing, and linedef numbers in boldface are secrets which count toward the end-of-level tally.

Be ready to move as soon as the level starts, as there are imps behind you along with two shotgun guys in the towers to your left and right. Take the shotgun in front of you and drop into the nukage below, then run east to a step with an armor and a radiation shielding suit that is guarded by a few enemies. Lower the metal lift in the east wall and ride it up to a tunnel, then head north past some imps to find a chaingun and a switch that you can pull. Head back to the lift, killing one or more demons that try to block your path, and return to the ground floor then head south through a wall that has opened. Follow the passage west past one or two revenants to an outdoor area with shotgun guys and chaingunners, then go up the steps to find the blue keycard.

Go back down the steps and be ready to confront revenants and an arch-vile that teleport in, then head back to the nukage and go to the east side to find some steps leading back up to the "horseshoe". Kill a waiting pain elemental and cacodemons, then head north through a blue key door to reach the north side of the horseshoe before proceeding to a junction on the east side. Go east here to a cavern and kill two shotgun guys in the green structure ahead of you, then drop into the nukage below and go round to the east side of the structure to find two imps guarding a switch. Pull the switch then leave the structure and go to the west side of the nukage to find a teleporter that will put you on the ledge above. Return to the junction and kill some imps and chaingunners that have teleported in (their destination varies depending on skill level), then head north to another junction and go into a cavern where several enemies are guarding a rocket launcher and the red keycard.

Backtrack to the south horseshoe, where some revenants that teleport in, then drop into the nukage pool on the inside of the horseshoe and go through the red key door on the north side to enter a room with a teleporter. Enter the teleporter and kill a waiting imp, then go round the corner to find two barons of Hell hiding behind a green barrier. Walk through the east doorway to find yourself above the red key room, then follow the catwalk round to a small chamber containing a switch. Pull the switch then drop to the floor below, then go back to the north horseshoe and make your way to another junction on the west side where a door has opened leading to a cavern with imps, chaingunners and a mancubus. Head up the steps to the south doorway and go through it, then follow the tunnel (watching out for shotgun guys being revealed on either side) to an arch-vile which is guarding the exit teleporter.

A super shotgun can be found on the south-west side of the nukage pool around the south horseshoe.