MAP34: Movement Base is a level in Strife. It uses the music track "Danger". It is a slightly earlier, though nearly identical, version of MAP03: Front Base, and uses the working name of the resistance "movement" which eventually became the Front, which is still referenced in the commercial release by Macil in the game's introduction. In the original commercial release, this level cannot be completed due to missing resources, and displays a broken hall of mirrors effect if the exit switch is pressed. In the 2014 re-release as Strife: Veteran Edition, the level is both completable and displays an ending artwork screen. 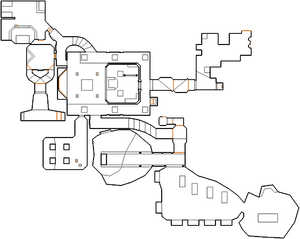 Map of Movement Base
Letters in italics refer to marked spots on the map. Sector numbers in boldface are secrets.

You enter this level standing on a teleport pad. Step forward to lower the wall, then turn left and right to find Macil standing on a raised platform. Talk to him and accept his offer to fight for the Movement.

When the conversation is over, turn round and head down the passage. At the end, pass between the crates to find a switch marked "EXIT". Press it to complete the demo.

Of the demo maps, this map most closely resembles its final version. Differences include:

Two water bottles (Things 22 and 26) have no flags set for any of the three difficulty classes, so they do not actually appear in the level.