MAP34: Necromancy is the second map of the No Hope For Peace episode of Doom 2 Unleashed. It was designed by Adrian Hanekom (DeathevokatioN) and uses the music track "Donna to the Rescue" by Robert Prince. 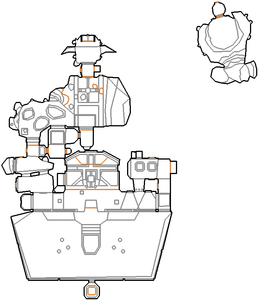 Map of Necromancy
Letters in italics refer to marked spots on the map. Sector, thing, and linedef numbers in boldface are secrets which count toward the end-of-level tally.

Kill the shotgun guy in front of you then step down to its platform - turn around here and kill the shotgun guys and zombiemen that appear on the ledge above you, then go back up the steps and press use on the metal lift to lower it. Ride the lift up and press the gargoyle switch straight ahead, kill the imps that teleport in then go back to the lift and look east to see a grated window with two chaingunners. Go through the doorway and kill any waiting shotgun guys, then flip the switch on your right to lower a lift (revealing a chaingunner) and ride it up to a skull switch.

Press the switch then go back outside (killing a revealed shotgun guy and chaingunner) and look west of the starting lift to see that the floor has lowered. Drop down to a rock chamber and blow up the barrels to the north to kill two chaingunners and a zombieman, then press the satyr switch on the west wall to open two nearby doors and reveal two chaingunners and a shotgun guy. Go through the doors and flip the switch in the north-west corner to lower a lift, then ride it up and kill a shotgun guy at the top before going through a door and killing a chaingunner that is revealed in front of you. Turn left to kill two more shotgun guys then head round the corner to a door, go through it and turn left to kill a chaingunner on a balcony. Step on the balcony and kill the imps and zombies waiting below, then drop down and take the super shotgun in the north-east corner and press the gargoyle switch next to it to lower a lift.

Step past the lift before it rises and kill two waiting chaingunners, then step into the teleporter behind them to land on a berserk pack in a small cavern. Kill the six shotgun guys in front of you, open the door behind them then kill the waiting demon and flip the switch it was guarding to finish the level.

Before dropping off the balcony just before the lift leading to the exit teleporter, head south to find an armor between two medikits.

Two multiplayer-only shotgun guys (Things 18 and 19) and a ditto pair of zombiemen (20 and 21) at the top of the first elevator have no flags set for any of the three difficulty classes, so they do not actually appear in the level.

* The vertex count without the effect of node building is 1292.