MAP34: Plant Ops is the thirty-fourth map in the 2020 re-release of Doom 64 and the first map of its new The Lost Levels episode. This map takes place on a distant, abandoned UAC base on the surface of Sedna.[1] It was designed by Samuel Villarreal (Kaiser) and uses the music track "Collision Course". 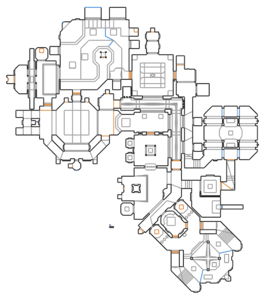 Map of Plant Ops
Letters in italics refer to marked spots on the map. Sector and Thing numbers in boldface are secrets which count toward the end-of-level tally.

Upon starting the map, head into the room in front of you. There you'll encounter the first troopers. Take them out and a switch will rise that raises the bars blocking the teleporters just outside the room. Walk through the rightmost one and you'll find yourself in a corridor accompanied by imps and more troopers. There's a lift across the hall, leading to a channel of nukage and several lost souls and a demon just before another lift. Once you take that elevator, press the switch by the teleporter and then escape, as you won't have the ammo to deal with the monsters through the window yet.

Walking through the teleporter will bring you back to the hall and you'll see that pressing the switch lowered the bars that were previously blocking off the next room. Beware, as when you get near the entrance, some nightmare imps and demons will appear ready to attack. When they are dealt with, do yourself a favor and press a switch by the monitors before entering the next room, since it'll reveal some much needed ammo.

Grab the chaingun in the next room and prepare for a big battle, because opening the door will spawn in a Hell knight along with the other demons seen earlier. Dispatch all enemies and head up the nearby lift, and do the same for the others on the second floor. After that, look behind the pillar near the caged nightmare imps to see the red key. When collecting it, several cacodemons will spawn above the nukage pit.

Open the red door to see another demon and Hell knight, and a switch just beyond a crusher. When heading towards it, more nightmare imps will spawn. Pressing the switch opens a door on the other side of the room, revealing another Hell knight waiting for you and a teleporter to take you back to the starting area. There you'll find many sergeants have entered the battle just beyond the red door leading to the blue key. When passing a certain line, a cacodemon and some imps will appear behind the bars.

After obtaining the blue key, take the opposite teleporter to see a rocket launcher at the center of the room, which was raised before by a platform if you already entered this area. Be careful, as getting the rocket launcher will lower several platforms that set more troopers on you. Opening the blue door, head through the hallway and take down the sergeants and caged imps, and soon you'll find the yellow key in a room filled with more enemies ready to ambush. Once you take care of them, get the key and get out of there.

When you open the yellow door, grab the radiation shielding suit, as there's more nukage in this area. Crossing certain lines will cause more demons to join the fight, including more cacodemons and the first baron of Hell of the expansion. Taking these demons out is necessary, since some stairs get raised when they're all defeated. Once the stairs raise, the teleporter will take you to a small room with a switch. Leaving this room shows you the bridge raised to the door leading to the exit.

After heading through the right teleporter, there's a room by the lift that has a green armor.

Just before getting the red key, it's preferred to get the super shotgun that lies on the yet to be raised bridge, as it can come in handy for the rest of the map.

* The vertex count without the effect of node building is 1899.