MAP34: Silo on the Edge of Forever (Project Einherjar)

Map34: Silo on the Edge of Forever is the thirty-fourth map of Project Einherjar, designed by Impie in 2017 and constructed in Doom Builder 2. 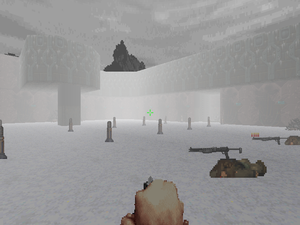 The start point, at the entrance to a long-forgotten missile silo.

A single platoon of Midgard and Jotun soldiers inhabits the base: it's a small but nasty force that shouldn't be taken lightly.

Take the lift down into the base and mop up the robots, dogs, and ensuing Purger ambush. You'll get a brief glimpse of the Admiral fleeing into the silo, locking the doors behind her. In the empty garage beyond is a team of Jotuns and amazons, backed by a single Einherjar. Kill them all, unlock the storeroom gates, and proceed past the red silo door and down the stairs to the rocket test chambers. You'll be locked in once you enter.

Hit the switch to release the three Einherjar types: regular, Jotun, and Thor. Kill the Thor last, as his death triggers the lift, which lowers to reveal a pair of Hreidmars hiding behind it. Blast them and take the lift up to the red key, then prepare yourself and enter the silo.

Shortly after you enter, you are assaulted by Thea Skuld and several Mommybots. Kill her to access the observation booth and the switch that opens the silo doors, which also opens the exit door and triggers a Ghost and Einherjar ambush.

In your final confrontation with Skuld, she ducks and weaves between the missiles in the darkness of the silo, making her difficult to avoid or get a bead on. Because of the silo's layout, it can be difficult to predict where she will pop up: she often ends up circling Juno for a shot to the flank with her missile launcher. If you take too long to kill her, the missiles begin to lower into their silos, gradually removing your cover. Once she is dead, stairs raise to the observation booth.