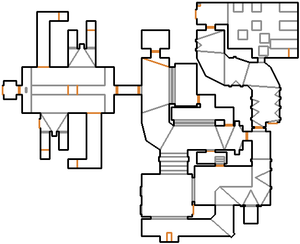 Map of The Focus
Letters in italics refer to marked spots on the map. Sector, thing, and linedef numbers in boldface are secrets which count toward the end-of-level tally.

Go through the door in front of you at the start of the level. In the next hall, go straight forward, head up the short staircase and press the switch in the room at the top. This lowers the blue keycard visible through one of the windows. Go back down the stairs, turn right and go through the door. To the left is the locked blue door, so continue right along the path until you reach the blue keycard. Once it is collected, head back the way you came. On your way back, you will be ambushed by a group of imps from a newly opened closet. Head back to the blue door by continuing to follow the path.

On the other side of the blue door, turn round and press the switch next to the door to turn on the lights in the corridor. Make your way to the end of the hall and through the next door. In the next room, stand on the small box in the corner near the door, which causes a crate in the middle of the room to lower and then rise again. Ride it back up to get the red keycard. From here it is quickest to turn left and drop off the crate into secret #3, as the teleporter here will send you back to the room with the switch that lowered the blue key.

Back in the starting hallway, go through the two red doors and walk along the walkway to get the yellow keycard. Be prepared, as you will be ambushed by several chaingunners when you pick up the key. Drop down to the left side of the walkway you are on and follow the tunnel to a teleporter, and step into it. When you reach the other side, turn left and flip the switch on the wall to raise the exit walkway. Go through the teleporter to your left to be teleported back onto the raised walkway. Go through the now-accessible yellow door to the exit switch.