MAP34: The Lost Chasm is the bonus map of Doom 2 In Name Only. It was designed by Joseph Lord and uses the music track "". The par time defined in MAPINFO is 8:30. 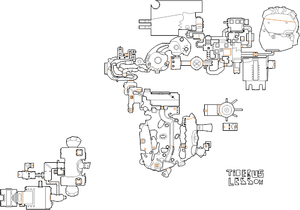 Map of The Lost Chasm
Letters in italics refer to marked spots on the map. Sector, thing, and linedef numbers in boldface are secrets which count toward the end-of-level tally.

It is possible to get stuck inside the non-damaging lava sector en route to Secret #6 if one is playing on Hurt Me Plenty or lower. This is because the teleport destination thing (Thing 1063) is only flagged for Ultra-Violence or higher.

It is also impossible to finish the map normally without cheating once you get to the blood pit. Once you grab the chainsaw, the rock wall will lower revealing more of the caverns ahead. You are supposed to shoot the brown rock walls down to proceed, but the second one you come across (linedef 213) will not open up regardless of whether or not you shoot at it. This issue probably only exists in modern source ports.

* The vertex count without the effect of node building is 5013.