MAP35: A Bad Place to Live is the thirty-fifth map of 32in24-7, a Capture the Flag megawad. It was designed by Conor Maddin (ClonedPickle) and Chris Harriman (Impboy), and uses the music track "The Demons from Adrian's Pen," originally composed by Robert Prince for Doom.

Map of A Bad Place to Live 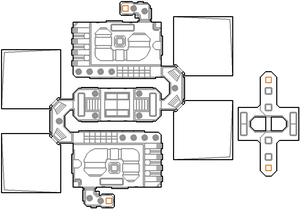 Map of A Bad Place to Live

Team Blue has two spawn points more than Team Red, so the map is not symmetrical.

* The vertex count without the effect of node building is 2087.