MAP35: Broken Arrow is the thirty-fifth map of Project Einherjar, the finale of Return to Jotunheim, and the final map of the megawad. It was designed by Mike MacDee (Impie) and uses the music track "". 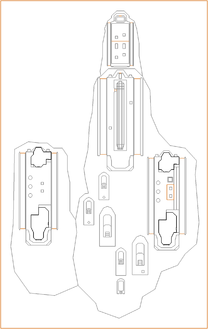 Map of Broken Arrow
Letters in italics refer to marked spots on the map. Sector, thing, and linedef numbers in boldface are secrets which count toward the end-of-level tally.

Juno must reach the ship at the front of the line by leaping from one ship to the other. If she falls into the ocean, she is killed instantly.

She can take the easy route on her left, or the tougher route to her right: the latter involves boarding the right sea-crawler, which yields more supplies, but also an extra boss fight with Otto Hreidmar. Whichever route she takes, Lancers on both sea-crawlers will take potshots at her by the second jump; and soon after, a flock of Valravens will come gunning for her from all directions. Once she reaches the missile ship, two Regan Hreidmars ambush her: if they aren't dealt with, the showdown with Fafnir will be very brief, and very messy. The left side of the missile has a panel with a red lock, protecting the exit switch.

When Juno reaches the lead ship, its cabin suddenly opens and Fafnir comes gunning for her. Unlike the rest of the enemy roster, he is able to fire while moving, and he doesn't let his finger off the trigger until Juno is dead or out of sight. Therefore he dogs Juno's steps relentlessly, shredding her the moment he gets a glimpse of her. The auto-shotgun is the best bet against him, since it can stun him and temporarily stop his onslaught.

He drops the red key when killed: grab it and hit the switch to lower the lift and disarm the missile.

The title is a reference to the John Woo film of the same name, about a stolen nuclear missile.