MAP35: Drown is the third map of the All Hope for Terror episode of 2048 Unleashed. It was designed by James Caldwell (Obsidian) and uses the music track that is played on the intermission screen. 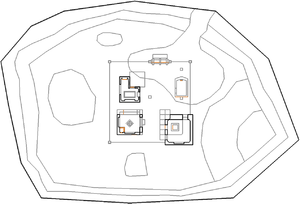 Map of Drown
Letters in italics refer to marked spots on the map. Sector, thing, and linedef numbers in boldface are secrets which count toward the end-of-level tally.

You start facing a ledge with imps and a yellow keycard. Turn right and head through a doorway to get outside where some zombiemen and one or more demons are waiting. Climb up the tan staircase ahead of you to enter the south-east building, kill some waiting zombiemen then follow the passage round a corner and run through the north doorway to land inside a boat containing a shotgun and a switch. Kill a cacodemon that appears in front of you, flip the switch then quickly leave the boat and return to the starting building - a lift has lowered that you can ride up to the ledge with the yellow key.

Slay the zombiemen that teleport in then go to the north-west building and head round to its north side to find a door that requires the yellow key. Open the door and kill any shotgun guys waiting inside the building then go inside to find a blue skull switch - press it then quickly head through a bookcase that lowers behind you and run south-east to the tan staircase you used earlier; one of the steps has lowered allowing you to enter a cage containing the blue keycard. Press the switch on the pillar inside the cage to lower it and get the blue key, then press the switch behind you to lower the tan step again so you can leave.

Kill two lost souls that have appeared outside (or cacodemons on Hurt Me Plenty (HMP) skill level or higher) then return to the start point and open the blue bars in the corner. Flip the switch behind the bars then go outside and look north to see that a wooden gate has lowered, revealing one or two revenants. Step through the gate to finish the level.