MAP35: Ein Lustiger Ort (German for A funny place) is the third secret ZDoom-only map of Whispers of Satan. It was designed by Paul Corfiatis, who also wrote the music track for this level, "Secrets".

This level contains a secret level exit to MAP34: 1994 Revisited. Normally completing this level takes the player to MAP16: Undervilla. 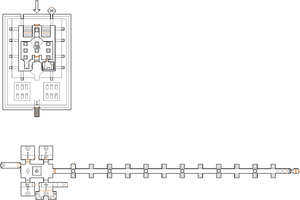 Map of Ein Lustiger Ort
Letters in italics refer to marked spots on the map. Sector, thing, and linedef numbers in boldface are secrets which count toward the end-of-level tally.

Kill the Wolfenstein SS in front of you and open the door that the arrow is pointing to. You will appear in a room with "1" on the floor and a voodoo doll behind a cage. Grab the soul sphere and then flip the switch to lower the barriers to the diamond that the voodoo doll is in front of. Now you will have to shoot the voodoo doll (use your shotgun) to have him enter the diamond, where he will teleport. When he teleports, exit the room and find the room with "2" on the floor. Repeat the same process: grab the soul sphere, flip the switch, and then shoot the voodoo doll. Do the same things for rooms "3" and "4". After shooting the voodoo doll in room "4" until he teleports, some switches will appear. Shoot all of them to open a wall nearby with Wolfenstein SS, an invulnerability, and a switch. Be sure to grab the invulnerability before you press the switch; when you press it, barrels will explode and you will somehow obtain the yellow key. Behind the yellow door, it is a safe bet to simply run all the way to the end of the corridor as fast as possible. You will alert the cyberdemons as you run down the corridor. Make it all the way to the exit door and head inside. It will close behind you, and you will hear that crushers will kill the cyberdemons for you. Either way, you are at the normal exit.

To get the secret exit, go to Secret #3 and enter the teleporter in front of the "IMPSE RULZ" sign. When you teleport, turn around and go into the moat of bodies. You can find a radiation suit in one of the lower corners. Go to the northern side in the moat, behind the building. Press on the wall that has a skull on it to open a nearby one to the northeast. This one holds the secret exit with "1994" on the floor.

* The vertex count without the effect of node building is 1743.