MAP35: Evil Sacrifice is the thirty-fifth map in the 2020 re-release of Doom 64 and the second map of its new The Lost Levels episode. This map, along with the remainder of the episode that follows it, takes place in Hell. It was designed by Samuel Villarreal (Kaiser) and uses the music track "Other Side Of Madness". 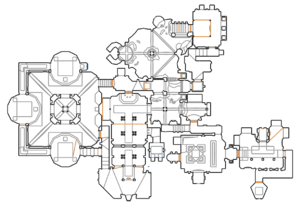 Map of Evil Sacrifice
Letters in italics refer to marked spots on the map. Sector and Thing numbers in boldface are secrets which count toward the end-of-level tally.

Grab the shotgun in front of you and use it to kill the imps that litter the field and shotgunners behind the grate. Press the switch to your left to lower a pedestal holding the super shotgun, then make your way down the stairs in front of the switch. The small room holding a Hell knight here descends further down upon pressing the switch and you'll be ambushed by several more imps. Once they're dead, a way out opens to the right. Go up the stairs here, fighting more enemies and collecting supplies as you go, until you come across a lift leading to another switch which lowers the bars next to the super shotgun in the starting courtyard. Then, backtrack to where you killed the first Hell knight and the platform will raise back up, leading you back to the courtyard which is now populated by nightmare imps and cacodemons.

Past the now lowered bars, be careful not to get pinned down by the demons prowling the area or the nightmare imps behind grates above you. Here you may choose to go left or right, going left leads to a key but going right sooner leads to up to two new weapons. There is a hole to the wall on the right where you can pick up a rocket launcher and several more supplies, but entering here causes more enemies to spawn, including imps and nightmare imps, lost souls, spectres, Hell knights and once the doors to the other side of this building have opened you will also fight a baron of Hell and arachnotrons behind the grates above. Past the baron there is a switch that opens some bars in this room, leading you to a small alcove where you may choose to obtain either a plasma rifle or soul sphere, but not both of them. Once you have chosen, some more monsters will spawn in the central area.

Now that you're better equipped, head outside and to the door on the other side. Eliminate the enemies in this small building but watch out for the pain elemental and lost souls ambushing you as you press the switches, after which you can obtain the yellow skull key. Make sure to also get the berserk pack from where the group of lost souls emerged. Go back to the building that contained the rocket launcher and enter the door to the right of where it was, where you may now find the yellow door. Up the stairs here is another outdoors area with many shotgunners and cacodemons. Clear them out and pick the supplies scattered across the field, then enter through the door that you see. This will take you to the upper platform where the first arachnotron you saw was shooting at you from, and there may be some enemies left in this area. Kill them then pick up the blue skull key.

Picking the blue skull key will cause several more arachnotrons and other monsters to spawn in the area, and you may use the newly revealed stairs to reach the upper platforms around the courtyard. At the end of this path is the blue switch, which causes the structure at the centre of the courtyard to lower, revealing the red skull key, two pain elementals and more arachnotrons once you pick up the key. The red door may be located in the small library building the yellow key was at. Make your way there and you will enter a new section of the library. Behind the door and the two Hell knights is a switch that lowers a platform to the corridor containing four more spectres and the exit door.

In the corridor where the yellow door is, there's a lift you can ride up containing shotgunners and a switch. This switch lowers a partial invisibility sphere on a pedestal outside which you can immediately jump to.

If the player leaves the area with the red key without actually picking up the key, the way to get back there is blocked off, leaving the player stuck and unable to progress.