MAP35: Factory: Production is a secret level in Strife: Veteran Edition. It was designed by Samuel Villarreal (Kaiser) and uses the music track "Tribal". It plays an important role in the re-release's talisman quest. 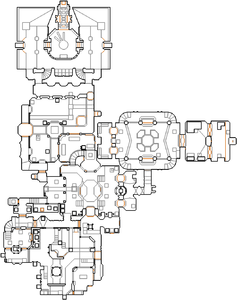 Map of Factory: Production
Letters in italics refer to marked spots on the map. Sector, thing, and linedef numbers in boldface are secrets.

This level is a straight-up slug fest. There are no secrets, interesting NPCs, or side quests, only one extremely tough battle from beginning to end, including multiple confrontations with the inquisitor, two of which are in the first major room. The goal of the level is to reach the temple ruins at the far end, which contain the red talisman, one of three ancient artifacts that occur in the Veteran Edition. In order to collect the talisman, all crusaders on the map must be dead. Note that in this level, the crusaders will not respawn during Bloodbath difficulty in order to make the feat possible.

Pull the switch in front of you to open the doors, then take the supplies in the room beyond and press the switch on the west wall to open the door next to it. There are sentinels, stalkers and crusaders in the next room, but do not go too far inside as the first inquisitor is hiding behind the central pillar; have the Sigil or the mauler's torpedo mode ready to destroy it. Once clear, lower either of the lifts at the west end of the room and ride them up, slay the waiting acolytes and take the bullets here before throwing both switches (one opens the way forward, and the other opens the doors leading back to the level entrance.) Lower the lifts again to find that the central pillar has lowered to reveal another inquisitor and four sentinels. Use the window between the switches for cover as you destroy these threats.

Once the room is clear, step on the lift south of the pillar to be taken up to a doorway and go through it. Head down the steps and round the corner, then step on either lift in front of you to reach a large area with numerous enemies, mainly acolytes but also stalkers (plus a templar on Elite or Bloodbath skill levels). Clear the enemies and head to the north-west corner of the room, then climb the stairs and throw the switch by the windows to open a set of bars across the room. Make your way there and step on the lift to be taken up to a new area. At the top, head straight forward round the silver pillar and step on another lift. Turn right at the bottom and step onto a walkway with water on either side.

Head straight forward and jump over the railing to land in an area with two peasants, then press the button on the gray panel next to them to open a set of bars nearby. Head north up the steps, then turn around and destroy the crusader ahead. Go straight forward (south) and you will go down some steps into water, then follow the water round to the left and go through the tan door ahead. Jump on the ledge ahead to get to the floor above, destroy the templar found here on Elite or Bloodbath and then press the switch in the north-east corner which will open some doors further into the level. Go through the bars next to the switch, turn left and lower the lift ahead, then turn left to return to an earlier walkway.

Go straight forward past the octagonal pillar, watching out for sentinels that emerge from wall openings, and you will go under an overhang decorated with red banners. Turn right and go through the metal barriers you opened earlier, slay the acolytes behind them (plus a reaver on Veteran or higher) and climb the nearby steps to the top. Press the button on the wall ahead to lower the metal barrier here (which will save some time when backtracking) and go through the door on the left. Pass between two square silver pillars and open the door on the left to find three med patches, then go down the stairs and follow the path to another door. Go through the door and turn left, following the passage to another lift.

Ready a powerful weapon before using the lift, as you may be spotted by an inquisitor waiting ahead. Lower the lift and let it take you up, then turn right and destroy the reaver ahead (or templar on Elite or Bloodbath) along with another crusader, before turning the switch on the wall behind them which will open two nearby doors. Follow the walkway east or south and go through the doors you just opened, then take the map item in this room before pressing the switch on the east wall which will lower some bars ahead. If you have not done so already, destroy the inquisitor now (along with the crusader on the lower floor on Elite or Bloodbath) then follow the walkway north to another lift which will take you down to a water pool.

Destroy the sentinel ahead then climb the staircase next to it to reach the talisman temple. This area is guarded by acolytes (all but one will be replaced with templars on Elite or Bloodbath) and overlooked by four crusaders. Destroy everything then go round to the east or west sides of the central structure to find stairs leading down to one more crusader, joined by two templars on Veteran or higher. Destroy them and look north to see another templar guarding the red talisman at the end of a series of platforms; if all the crusaders are destroyed then the platform with the talisman will have lowered so you can collect it. Cross the platforms (watching out for crushing ceilings above two of them) and collect the talisman. (If you have collected all three talismans then your punch dagger will become much more powerful from here on.)

As you backtrack through the level, watch out for templars that have teleported into various rooms. You may want to use the teleporter that has opened near the lift leading to the talisman temple, which will put you west of the level entrance. Once you return to the entrance you will be sent back to the forge.

There are no official secrets, since the method of accessing the map is itself obscure enough that it is not required in order to attain the game's "Completionist" achievement. There is a teleporter which can be accessed in multiplayer via a deathmatch start, or after collecting the red talisman in single player. If the wall here is lowered and walked through from inside, the platform containing the red talisman will lower as well. This allows the item to be collected when the -nomonsters command line parameter or front end setting is in effect. 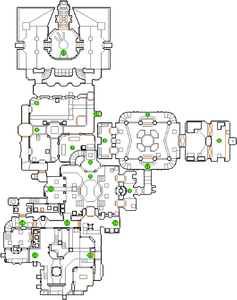 * The vertex count without the effect of node building is 3362.