MAP35: Midnight Tek Frenzy is an Easter egg map of Community Chest 4. It was designed by Brian Knox (Snakes) and uses "Where Iz It?", a music track from Rise of the Triad composed by Lee Jackson. It cannot be reached in normal gameplay; it must be accessed through a command line argument, a cheat code, or a console command depending on source port used to run the WAD. Completing this level will end the game if the port has no MAPINFO support; if it does, the player will be taken to MAP01: Renewed Faith.

The level was released standalone after it failed to make it into the main megawad, but was included as an Easter egg out of sympathy from the project leader (see Inspiration and development). 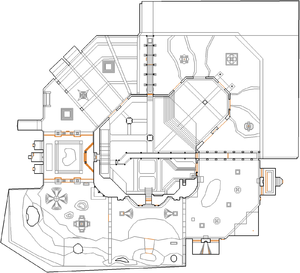 Map of Midnight Tek Frenzy
Letters in italics refer to marked spots on the map. Sector, thing, and linedef numbers in boldface are secrets which count toward the end-of-level tally.

This bonus level makes clear with its open layout and fast-paced soundtrack that it is a slaughter map. While ammo and health are not lacking at any point, neither are the monsters. All six keys need to be acquired to exit, and the level allows them to be collected in a variety of orders. Thus, the walkthrough below is but a suggested route.

You begin in the southern section of the level, facing a central building. (On co-op, player 3 and 4 start in the northeast section of the central building). Immediately, you are set upon by four demons, six imps on either side, and two shotgun guys on top of metal pillars. Rush forward and grab the shotgun, super shotgun and box of shotgun shells next to these pillars. Take out the enemies (use the barrels to dispose of the imps on the walls) and flip the switch on the western pillar to lower a wall to the west. This allows you access to the southwest section of the level, where the red skull key is.

Kill the chaingunner dead ahead as the wall lowers. As you enter, you will be set upon by another big horde of monsters. Use the barrel in the northeast to take out the horde of zombiemen on the ledge in the northeast. You then need to dodge fire from the revenants, arachnotrons and mancubus to grab the rocket launcher in the north, which will allow you to start cleaning house. Try to do this before cacodemons and pain elementals trickle in from the north. All this while, you must be aware that the wall east of the starting point has lowered too, and enemies may trickle in from there. Once the enemies are cleared out, flip the switch in the north to temporarily lower the southern pillar, revealing a switch inside. Flip this to permanently lower the northern pillar with the red skull key, but watch for the arch-vile that will teleport onto the ledge in the southwest. Use the soulsphere to heal up if the arch-vile successfully hit you.

Head back to the south side of the level (where you started), then enter the main building. Walk forward to generate stairs. Three mancubi await in a caged area dead ahead, and some imps, demons and shotgun guys will also approach. Your priority, however, are the three chaingunners east of the entrance to this building. Clear all the enemies out, then grab the megaarmor opposite the entrance and the plasma gun where the shotgun guys were.

Head back out of the building, then go east to the southeast section of the level. You need to watch for demons and imps in the north and northwest (use the barrels to kill the ones on the walkway), shotgun guys on a ledge in the west, revenants on a ledge in the southwest and three Hell knights on the ground. Some cacodemons may attack from the north too. Your goal is to flip three switches in this area: one in the south, one in the east and one in the northwest.

Once you flip all three switches, two large chambers with a grand total of 88 imps (and four demons) will open. These imps will teleport to various points in the area. If they are distant enough, use rockets; if they are too close, use plasma. Once they are dead, head into the eastern chamber and flip the switch in the back. This opens walls in the southeast, revealing three mancubi and an arch-vile, as well as the blue keycard. The arch-vile is going to resurrect the imps and use them as its meatshield - stop it doing that with rockets. The barrels near the southwest will help here. Grab the blue keycard in the southwest once you are done.

Head into the central building again, and head west. You will see a ladder leading up into the narrow caged area where the mancubi were. Head up it and follow the path to its end, collecting a berserk pack along the way. This leads to a ledge with the red keycard at its end. However, once you cross the halfway mark of the ledge, the floor sinks with you on it, forming a narrow pit. Imps and demons will begin teleporting in from both sides - use plasma and spin around to keep monsters from both sides at bay. After a short while, the ledge will rise up again, allowing you to reach the red keycard. Once that happens, you might wish to jump off the ledge to the south (back into the southeast area) for more breathing room first before collecting the keycard.

Next, head to the northeast of the central building and jump out a window to end up in the northeast section of the map. You will need to watch for shotgun guys and imps on the outer wall, arachnotrons in the west, as well as imps and spectres on the ground. There are two pillars that automatically rise and lower. Flip the switches hidden in them when the pillar is lowered to completely lower the pillar with the yellow skull key. However, once the pillar with the yellow skull key lowers, two arch-viles will teleport in. Use the shape of the central building as cover and burst them down once they peek out.

Head to the west of the yellow skull key area and find the ladder on to the ledge where the arachnotrons were. Cross the ledge and drop down into the northwest of the map. Here, you will have to deal with three mancubi, shotgun guys on a ledge and scattered revenants and imps. You need to flip the two switches on either end of this area to fully lower the pillar with the blue skull key on it. When you flip the first switch, the ledge where some revenants and imps were lowers, revealing another set of revenants and imps. When you flip the second switch, a large teleport trap opens, filling the area with six chaingunners, seven demons and five revenants. The metal squares on the ground will also rise up, and a mancubus will teleport onto each one. This is where the [[BFG9000] you find in this area will come in handy. Of course, monster infighting will help save ammo too.

Head to the east of the blue skull key area and climb the ladder up to the ledge. Approach the yellow keycard. About halfway there, a trap activates, causing a cyberdemon to rise out of the floor. Jump off the ledge to either side, perform micro-dodging against the cyberdemon's rockets and return fire with your own rockets (or a BFG9000 shot if you're daring enough to close the distance). Once the cyberdemon is dead, collect the key it was protecting.

Follow the yellow keycard ledge back into the main building and head to the west side. Flip the switch in the west to raise the bars and lower the switch panel, allowing access to the final area of the map with three doors ahead. The following sequence of events will happen, and it is important to take them all into consideration when planning your strategy for this area:

While this looks impossible, do not panic. Again, infighting will save the day:

Once all monsters have been felled, head back to the western area of the map. Flip the switches in this sequence - center, right, left. The bars to the exit teleporter in the center alcove will be open. Step into it to end the level.

* The vertex count without the effect of node building is 3088.

Compared to the standalone release, this level contains fixes for several bugs that were originally present. This included a big slime trail in the center of the level, a lowering sector erroneously split in two, and Hall of Mirrors effects inside certain pillars. It also fixes lighting inconsistencies throughout the level.

The sky texture for MAP12-20 appears on this level via a linedef action that causes a different sky texture to be shown than normal, even though this is technically not a feature of Boom but of MBF. However, PrBoom+ supports this action when using Boom compatibility levels or higher, because it has been mistaken for a Boom feature for years; this is possibly because of Doom Builder including it in its Boom configuration.

The level was designed for inclusion into the main megawad. However, it was not completed on time for the November 16, 2011 deadline imposed for level submissions. Knox eventually finished and published the level on March 22, 2012, as a standalone WAD on the idgames/ archive [1]. When Eric Baker (The Green Herring), the project leader, played the WAD, he felt bad for the author because it would have passed the project's quality check had it been completed and submitted on time; unlike several levels cut from the map roster, it missed inclusion in the project only because it was not finished by the deadline. Consequently, Baker got permission from Knox to include the level in the megawad as an easter egg [2], with bugfixes performed by them both. To aid in keeping its inclusion secret, this level did not appear in any of the public beta releases.

After the final release of the WAD, the easter egg level was first discovered by Keeper of Jericho, who made a post in the megawad's release thread at Doomworld on August 31, 2012 asking who the author was [3], despite this information appearing if the player beats the level.

The part of the wad directory in which this level is hidden is marked with a lump named "_FNORD". The word "fnord" is associated with satire of conspiracy theories and was popularized by The Illuminatus! Trilogy of novels as a word that children are taught by the Illuminati to be unable to consciously see.