MAP35: Piss Factory is the third map of the No Hope For Peace episode of Doom 2 Unleashed. It was designed by Chris Bourke (purist) and uses the music track "Deep Into the Code" by Robert Prince. 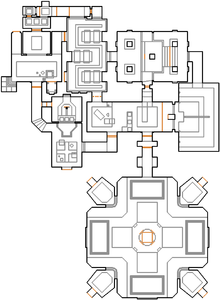 Map of Piss Factory
Letters in italics refer to marked spots on the map. Sector, thing, and linedef numbers in boldface are secrets which count toward the end-of-level tally.

Step forward and drop into the room below then head straight forward to a square tunnel and open the door on your right, which leads to a room with nukage and crushing ceilings. Kill the zombiemen and shotgun guys in this room then look in the south-west corner of the room to find a switch - flip it to open a door in the north-east corner and reveal four imps, then go through this door before it shuts again and open another door on the left. Walk over a brown step and kill the imp on the lift that lowers in front of you, ride it up to kill two more imps then approach the door in front of you which will automatically open to reveal two chaingunners. Open another door on the left and kill two more chaingunners waiting behind it, then open the large silver door to find zombies and a cacodemon guarding the yellow keycard.

Drop out of the window to return to the starting room, kill two cacodemons that teleport in and head straight forward through a door between two yellow key markers. Follow the passage up some steps to a room with crates and flip the switch on the south wall, which will open the east door to reveal three demons and reveal three chaingunners behind the fence to the north. Go through the door you just opened and follow the passage to another door, which leads to a storage area with several imps, zombiemen and shotgun guys. Head east around the crates until you pass a crate with the blue keycard on it, then look east to see another switch - flip it to open the doors on either side, then go through to face two chaingunners. Kill them along with four cacodemons that emerge from behind the low walls, then blow up the barrels surrounding the red keycard so you can collect it.

Go back into the storage area and look in the north-west corner to see some red bars; open them and take the radiation shielding suit then head forward to drop into the crusher room. East of the middle pair of crushers is a niche containing a chainsaw; the wall here has lowered to reveal a second nukage room containing some imps. Enter the room and head east until you reach a metal wall, then go round it to find two demons and an arch-vile at the foot of some tall steps. Climb the steps to the top and drop onto a platform rising from the nukage; once it stops, look south to see a platform with two shotgun guys and head through the door behind them to get on top of the crate with the blue keycard.

With the blue key, drop down to the ground and head south through a door between blue key markers, then open a second door behind it and blow up the barrels blocking your path. Take the super shotgun and box of shotgun shells from the ledges on either side then head forward to a large room with four mancubi (or eight on Hurt Me Plenty skill level or higher). Climb up to the central column and press the four switches around it, which will open chambers containing barons of Hell, imps, demons and Hell knights. There is a switch inside each chamber behind a varying number of candles - press the switches in a clockwise order starting from the north-west to activate four crushers that should kill the monsters for you, and lower the central column to reveal a teleporter. Step on it to finish the level.

In the starting room, enter the nukage pool in the north-west corner to find a switch. Flip it to lower a platform in the south-west corner holding a shotgun; watch out for four imps that teleport in to defend it.

* The vertex count without the effect of node building is 1225.