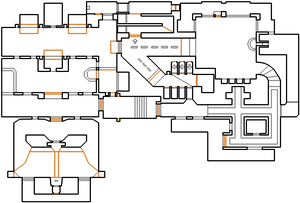 Map of The Waste Tunnels
Letters in italics refer to marked spots on the map. Sector, thing, and linedef numbers in boldface are secrets which count toward the end-of-level tally.

The opening conditions of the level are dependent on the chosen skill level. On I am a Wimp or Not Too Rough, there is a shotgun at the gate in front of you. However, on Hurt Me Plenty or Ultra Violence, a soulsphere can be seen in the distance, and the shotgun is replaced by a super shotgun.

Walk straight ahead at the start to enter a corridor. Beware the monsters that guard the area. Stay away from the walls, as there are several sinking platforms that can lead you to surprise encounters with imps that reside in small chambers below the floor. Head east towards the door at the end of the room. When you reach it, you will find that the floor in front of it is a concealed platform as well. At this point, you are faced with a dark corridor with flashing lights pointing in two directions.

Head straight forward down the path in front of you. At the end of the path, there is a lift leading to a brick-floored hall. Go through the door on the northern side of the hall to get behind the barred area. Follow the corridor around to the east to reach the red keycard. Continue down the passage and drop into a network of water tunnels.

Go through the red door that is straight ahead. On Hurt Me Plenty or Ultra Violence, a Hell knight waits behind the door. After defeating him, pick up the blue keycard, proceed through a second red door, and enter the blue door on your left.

Behind the door, continue west or east around the wall. Then proceed along the narrow ledge to the yellow keycard, which will cause two nearby walls to open and reveal cacodemons. When you collect the yellow key, a bridge will rise across the water pit to the exit door. Cross the bridge, open the exit door and press the switch behind it to finish.

In the starting corridor with the sinking platforms, the north-western imp chamber holds an armor pickup as well as two stimpacks. You can get there by moving towards the wall between the two red torches using small movements; with practice, you can make the floor lower without actually standing on it, letting you kill the imps from above.

After entering the dark corridor with flashing lights, you will see a flashing arrow pointing to a door on the left. Behind the door, there is a winding hallway with a soulsphere at its end. Notice that when you are at a hairpin turn, a room with a monster will be revealed in the direction you came from.

The southern path from the aforementioned dark corridor leads to a short hall with a series of doors. As you enter the new area, a door will close behind you, trapping you in temporarily unless you retreat rapidly. (Note that if you end up trapped outside the hall, you can reopen the door by returning to the platform at the fork.) Each of the northern doors covers a room with a switch. The arrows on the floor indicate what the toggles will do.

The south-east section of the water tunnels form a rectangular loop. The space in the middle of this loop can be accessed from its south side. There is a room with a rocket launcher guarded by a group of zombiemen. If you then enter the door to the west, you can get into the dry corridor behind the barred windows. The place holds a box of shells. On the three easiest skill levels, you can also find one or two medikits.

On Ultra Violence skill level, two lost souls in the water tunnel past the red keycard (things 105 and 106) occupy the same position and are immobile until one of them is killed. This issue is inherited from the PC version.