MAP35 is the thirty-fifth map of 50 Monsters. It was designed by James Caldwell (Obsidian) and uses the music track "Run 'Em, Gun 'Em, Kill 'Em," originally composed by James Paddock (Jimmy) for the Plutonia MIDI Pack. 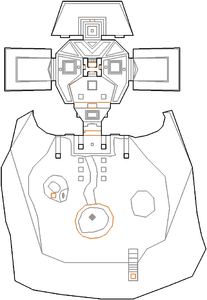 Map of MAP35
Letters in italics refer to marked spots on the map. Sector numbers in boldface are secrets which count toward the end-of-level tally.

The invulnerability at the building entrance can alternatively be revealed by stepping on the elevator at the beginning to make it lower and immediately backing off. This allows obtaining the invulnerability without registering the secret. (This does not work on certain ports such as GZDoom, but does on conservative ports such as Chocolate Doom.)