MAP36: Artiface is the fourth map of the All Hope for Terror episode of 2048 Unleashed. It was designed by James Caldwell (Obsidian) and uses the music track "Horizon" by Tom Mustaine. 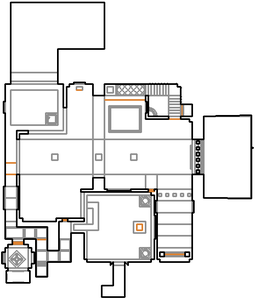 Map of Artiface
Letters in italics refer to marked spots on the map. Sector, thing, and linedef numbers in boldface are secrets which count toward the end-of-level tally.

Take the chainsaw then open the door on your left to confront an imp. Turn right and follow the candle-lined platforms past two zombiemen (and a chaingunner hiding behind a wall) until you reach a room containing the blue skull key on a pillar, then turn left and left again to reach a chamber with a river of damaging blood. Kill the zombiemen, demons and imps in the chamber then step across the blood to reach a small gargoyle switch - press it to lower the pillar holding the blue key, then go back to the key and pick it up. The floor around you will change to damaging blood and some lost souls will teleport in, so use caution.

Go back into the passage with candle-topped platforms and look for a blue skull switch on your right. Press it to reveal a knife switch which will lower all the platforms, then quickly follow the passage back to the starting room before the platforms rise again to find a blood-filled tunnel with a medikit and armor bonuses. Follow the tunnel until you reach a room with a revenant (the red skull key that was in this room will disappear out of sight) then drop out of the window to the blood river chamber and head due east until you see an opening in the wall on your left. Step through and kill two waiting chaingunners on Hurt Me Plenty skill level or higher, then climb up the steps and cross a bridge to reach the red key.

Drop to the ground and head south across the blood river to a red skull switch, then press it to reveal another knife switch that will open the neighboring red bars. Kill the arch-vile that emerges from the portal behind the bars, then step into the portal to finish the level.