MAP36: Cold Grounds is the thirty-sixth map in the 2020 re-release of Doom 64 and the third map of its new The Lost Levels episode. It was designed by Samuel Villarreal (Kaiser) and uses the music track "Wait For It". 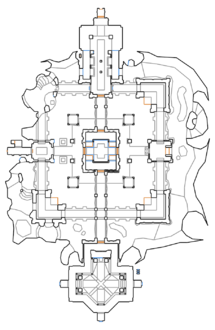 Map of Cold Grounds
Letters in italics refer to marked spots on the map. Sector and Thing numbers in boldface are secrets which count toward the end-of-level tally.

As you drop down, you'll be quickly fired upon by perched imps, caged arachnotrons and surrounded by several demons running in the water. It is important to grab some early starting weapons, so first of all get the first shotgun right after you drop, then either go left into the cave for a chaingun or further right and around the corner for a super shotgun. Now that you're better equipped, you may want to kill all the various enemies atop the cliffs and in the water to prevent them from bothering you later. Either way, once you're ready, you can enter the citadel.

There are two ways into the fortress. The first one is a lift located right in front of the super shotgun, while the second one is found further ahead, past another cave, where you may step onto the citadel's ground from a ledge. Taking the second entrance may be preferable because it leads directly to an invulnerability sphere, as there are much beefier demons hanging out inside the citadel itself, including Hell knights, cacodemons and pain elementals that can otherwise rapidly overwhelm you if you do not move quickly. Take the lift with the berserk pack and then move to the right and across the citadel's outer ring, picking up the various items as you do, including a rocket launcher atop the second lift you'll run into. You can drop down here, taking care not to get surrounded by the prowling demons, to obtain the yellow skull key. Picking it up will spawn several nightmare imps all around you.

The yellow switch located near the aforementioned invulnerability will raise two bridges to the center of the citadel: cross them both to reach an otherwise blocked off area where caged shotgunners used to be, and press the switch here to open up a wall revealing two Hell knights and another switch, which will lower the bars around the cave from where you dropped onto the invulnerability. There, you may find more ammo and a backpack in front of a new switch which will reveal the red skull key. Pick it up and be prepared for the large numbers of shotgunners, nightmare imps and cacodemons that subsequently spawn. With the red key in hand you can once again use the previously raised bridge to reach the center of the citadel where the two red doors are located. Killing the enemies inside will allow you to use two sets of platforms to reach the citadel's higher bridges.

Take the southern bridge but be careful not to be hit in the back by the various cacodemons and lost souls roaming the area. Past the door here you will see three demonic faces: memorize their pattern because in the room ahead, after killing all the enemies, you will have to adjust three faces so that they match the pattern from earlier. This will lower the blue skull key, and picking it up once again unleashes new foes for you to face. After you're done, go back to the central room and take the other set of platforms to reach the northern bridge, where past the blue door there, a few more enemies guard the exit door, which may be reached by pressing the switch to raise a bridge over the moat.

* The vertex count without the effect of node building is 2217.