MAP36: Rehabilitated Warehouse is the fourth map of the No Hope For Peace episode of Doom 2 Unleashed. It was designed by Chris Harriman (Impboy) and uses the music track "Sign of Evil" by Robert Prince. 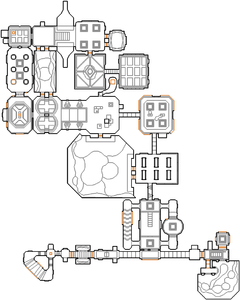 Map of Rehabilitated Warehouse
Letters in italics refer to marked spots on the map. Sector, thing, and linedef numbers in boldface are secrets which count toward the end-of-level tally.

Take the shotgun in front of you then head down the stairs to a room with a single zombieman on I'm Too Young To Die (ITYTD) and Hey Not Too Rough (HNTR) skill levels, joined by a cacodemon and demons on Hurt Me Plenty (HMP) plus a revenant, lost soul and shotgun guy on Ultra-Violence (UV) and Nightmare (NM). Go through the north door to find a lost soul and other monsters, then turn left to see more enemies at the top of some steps (including a Hell knight on UV and NM). Climb the steps and open either door on your left, kill the monsters waiting outside then step over the glowing rocks and open either door on the other side.

Kill a zombieman and one or two imps then turn left and climb the large steps to reach an area with crates. Kill any monsters waiting here then head east through the crates to find a staircase leading down to a chamber with a shotgun guy and demon on HMP or lower, plus five more monsters on UV and NM. Go south down another staircase to a room with bookcases and head straight forward into another passage. Exit the passage and go down the steps ahead, kill any demons that block your way on UV and NM then head straight forward through a narrow doorway with a window next to it. Turn left to climb a staircase and kill an approaching spectre, then open the door and kill two demons and a lost soul waiting on HMP or higher. Head through and open the door on your left (under an exit sign), where a zombieman (plus an imp and knight on HMP or higher) are guarding the exit switch.

From the room with crates, go down the steps and head west through a doorway. You will enter a room with a box of shotgun shells between two hanging corpses - picking up the box will open the west wall, revealing a cacodemon, shotgun guy and demon guarding a partial invisibility.

* The vertex count without the effect of node building is 2833.