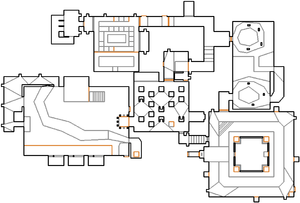 Map of The Crusher
Letters in italics refer to marked spots on the map. Sector, thing, and linedef numbers in boldface are secrets which count toward the end-of-level tally.

From the starting position, work your way straight forward through the forest of pillars to the lift on the far side, fighting enemies along the way. The lift will lower to a large room with a blue keycard, which appears in different locations depending on skill level. At the bottom of the lift, step out and press the switch on your right to activate the crusher and squash the Hell knights under it. Once they are dead and the crusher rises again, climb the stairs up to it to find a plasma gun and, on I am a Wimp or Not Too Rough, the blue keycard. On Hurt Me Plenty or Ultra Violence, take the lift back up and you will see a gap in the bars. Run through this to land on the ledge behind it and press the switch - this will lower a lift at the other end of the room holding the blue keycard, so go and collect it before the lift rises again.

Once you have the blue keycard, take the lift back up to the starting area, where an alcove containing several enemies has opened in the north wall. The blue door is next to this alcove, so go through it and press the switch on your left to lower another lift. Ride it to the upper floor and follow the corridor round, past the red door, until you reach a silver door. Open it and press the switch behind to lower a lift leading to another door, behind which is a large spiral staircase. Follow the staircase up, watching out for ambushes from chaingunners and revenants on the way, until you leap to a rectangular platform holding the red keycard. As you do this, the floor will lower to release some demons and a lost soul.

Backtrack up the corridor to the red door, watching out for another open alcove containing imps. Behind the red door is an outdoor area with round rock structures - carefully cross the bridge (the lava here is inescapable if you fall into it) and head through a narrow passage to the doorway on the other side. Open the door here to reach a large square room, with a sludge moat surrounding a metal structure. Turn left and follow the walkway round to a switch, which lowers the nearby platform holding the yellow keycard. When you pick up the keycard the central structure will open, allowing a number of monsters to teleport to the outer areas of the room. Dispose of them then step into any of the teleporters to enter the central structure, then press the switch on the east wall. This will raise a bridge behind you leading to the exit door - cross it, open the exit door and press the switch behind to finish the level.

A super shotgun is placed in the starting room, straight ahead of the start point. Going straight towards it alerts multiple enemies to the player's presence.

Taking the lift at the west end of the crusher room (which holds the blue keycard on higher skill levels) will bring you to a dark corridor with imps. Follow the corridor round to find a soulsphere at the end.