It features mancubi and arachnotrons as bosses. 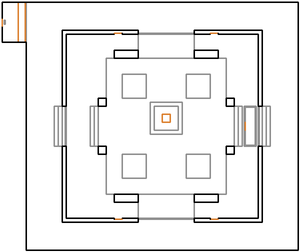 Map of Dead Simple
Letters in italics refer to marked spots on the map. Sector, thing, and linedef numbers in boldface are secrets which count toward the end-of-level tally.

Beginning in a narrow room, first collect the ten backpacks on your left and the super shotgun on your right. When ready, press the switch to lower the walls around you and reveal several mancubi. When all the mancubi are dead, the outer walls will open revealing an additional area with arachnotrons. Once they are all dead, a step will rise around the skull switches in the center of the room. Climb the steps to the switches and press any of them to finish the level.

The level contains four partial invisibility powerups, one in each corner of the inner area of the level.

The four square platforms in the inner area hold a rocket launcher, a plasma gun, a chaingun and a megasphere. A berserk pack can also be found on the ground between the two western platforms. You can lower the platforms by pressing the skull switches on the north and south walls, which will also release any mancubi standing on the platforms.

The outer area with arachnotrons holds numerous ammo pickups. On multiplayer this area also holds a rocket launcher, a super shotgun, a chaingun, a plasma gun and another megasphere.

There is a small room in the north-west corner of the map which contains a BFG9000, an energy cell pack and another exit switch, but can only be accessed during deathmatch. A player spawning inside this room can open it from inside by approaching the east wall.

The BFG9000 and the energy cell pack in the north-west alcove can only be reached in deathmatch, but will appear in single-player games because they are not flagged as multiplayer-only.

The PlayStation version only features some cosmetic differences to the map while keeping the level's geometry the same:

The Saturn version is the same with only a different music track and no colored lighting.

* The vertex count without the effect of node building is 155.