MAP37: Death Labs is the 37th level of Doom 64 TC and the second of a pair of demo maps, available via the menu entry "PLAY DEMO MAP". Now you can really test all the weapons you just collected. 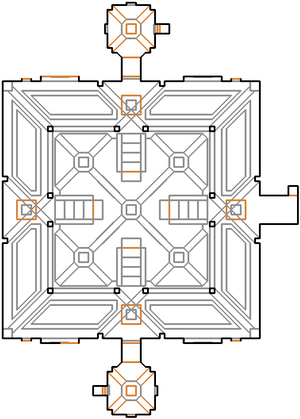 First grab all the ammo and weapons in the corners on the lower floor. You may need it because when you ascend the stairs, you will release different types of opponents in a respectable number.

There are two lifts to control rooms in the middle of opposite walls where you can find a Plasma gun and a BFG9000 on a podest. The right computer screen hides a niche to a Demon Key in each room (which you can't take if you already got them in the previous map).

There are four switches in each corner which lower the column in each opposite corner, but you are too slow to reach them even when running (you will probably need speeding tricks to reach them in time before they raise again), they will provide the Unmaker, the third Demon Key, a Supercharge and a Backpack.

The exit teleporter is always open and leads back to the first demo map – MAP36: Doom64 Museum