MAP37: Pumping Station is the fifth map of the No Hope For Peace episode of Doom 2 Unleashed. It was designed by Mars Jurich (TrueDude) and uses the music track "Demons on the Prey" by Robert Prince. 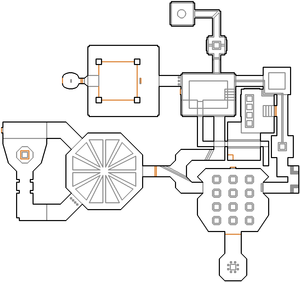 Follow the passage past two shotgun guys until you enter a room with zombiemen and more shotgun guys, then climb the steps and head south into a brick tunnel. Go round the corner and kill one to three imps, then turn left and left again to find three lost souls on Hurt Me Plenty (HMP) skill level or higher. Head forward until you drop into a large hall, take the items here (including a super shotgun and armor) then head south to find the blue keycard sitting on a step. Bars will rise around the key as you approach - turn around and kill nine cacodemons that teleport in, then press the switch that has been revealed in the north wall to lower the bars again so you can pick up the key.

Return to the hall and head east into a tunnel, then follow it past some zombiemen (plus shotgun guys on HMP or higher) until you see a door on the left between two blue key markers. Open it and kill the zombies waiting at the top of some steps, then climb up and turn left to kill five approaching demons (and three lost souls on HMP or higher) who are guarding the yellow keycard. Step across the water trench to pick up the key and kill three Hell knights that teleport in behind you, then leave the room and turn left and left again to return to an earlier room. Go up the steps and enter the brick tunnel again, but this time head west until you reach a door between yellow key markers - open it to find an octagonal room containing a mancubus, imps and demons which will be joined by two more mancubi on HMP and two knights on Ultra-Violence (UV) and Nightmare (NM) skill levels.

With the room clear, head north-west into a passage that contains four revenants on HMP or higher - kill them (along with three chaingunners visible through a fence on UV and NM) then press the switch at the end of the passage. Go back to the octagonal room and head into the south-west passage which is now open, following it until you reach the red keycard sitting on a step. Pick up the key and return to the octagonal room to kill many imps and lost souls that teleport in, then return to the room south of the starting area and press a switch on the west wall (requiring the red key) to open the bars next to it. Go through the doorway and head forward to a gray switch which will lower a platform with many demons on it, step on the platform to be carried up to the exit door and head west through it, then flip the switch to finish the level.