MAP37: Where the Slime Lives is the fifth map of the All Hope for Terror episode of 2048 Unleashed. It was designed by Adam Post (Doomkid) and uses the music track "Dark Halls" by Robert Prince. 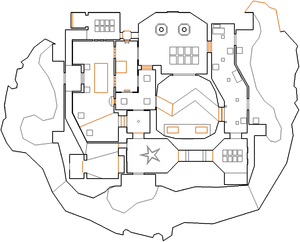 Map of Where the Slime Lives
Letters in italics refer to marked spots on the map. Sector, thing, and linedef numbers in boldface are secrets which count toward the end-of-level tally.

Go round the corner and open the door at the end of the passage to enter a room with a shotgun guy and some chaingunners. Collect the shotgun in this room then head east through a second door to reach a storage area with imps, chaingunners and a demon. Turn right again and head through the storage area, watching out for a revenant hiding behind a crate on the left, until you reach a metal doorway and step through it then turn left to see an empty corridor leading to a chamber with a star - the star room contains several monsters including a revenant and a Hell knight, and chaingunners (plus an arch-vile on Ultra-Violence (UV) and Nightmare (NM) skill levels) will appear in the corridor when you enter it. When all the monsters are dead, enter the star room and head north to find the red skull key along with a berserk pack.

Backtrack to the storage area, watching out for a knight and imps that have been released on the way - after going through the metal doorway, open the wooden wall on your left (requiring the red key) to reach a bridge over a nukage pit and step across it to the blue keycard, collecting a supercharge and a super shotgun on the way and watching out for two waiting cacodemons. As you approach the blue key the bridge will fall away and two marble columns will lower to reveal imps, plus a knight on Hurt Me Plenty (HMP) skill level and a baron of Hell on UV and NM (which will teleport elsewhere once the columns reach the nukage) - drop south off the bridge to collect a radiation shielding suit, then press the wall under the red key door to lower a lift so you can escape.

Go back to where you found the red key and open the door here (requiring the blue key) to enter a courtyard and confront two zombiemen and a revenant then head north - two mancubi and two spectres will appear ahead, next to a doorway leading into a chamber full of water. Kill the imps waiting behind the doorway then turn left and follow the passage until you reach some barrels - wait for the zombies in the next room to approach the barrels then blow them up for a quick kill. Enter the room and look west to see some revenants, joined by an arch-vile on HMP and a knight on UV and NM (one of the monsters will teleport elsewhere) - press the skull switch behind them to reveal a knight behind you (plus a revenant on HMP or higher) then return to the courtyard and head east through two doorways that have now opened. Bars will rise in front of the exit door and two revenants and chaingunners will appear - kill them, press the satyr switch by the south wall then head through the exit door. Kill one more chaingunner and press the north skull switch to finish the level.

Several items will only appear on certain skill levels:

Chainguns can be found in the west courtyard and behind a crate in the storage area.

The north-west room contains a rocket launcher, and can be reached from the water-filled room on the west side of the level.