MAP37: Wretched Vats is the thirty-seventh map in the 2020 re-release of Doom 64 and the fourth map of its new The Lost Levels episode. It was designed by Samuel Villarreal (Kaiser) and uses the music track "Warped". 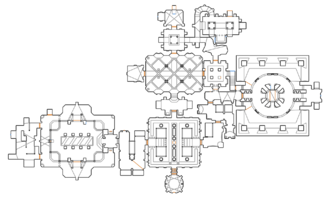 Map of Wretched Vats
Letters in italics refer to marked spots on the map. Sector and Thing numbers in boldface are secrets which count toward the end-of-level tally.

Grab the shotgun and ammo and prepare to fight, as the next room has shotgunners, imp and lost souls that can deal a lot of damage if you're not careful. The door ahead and down the stairs to the right require the red key, so for now, head left and take down the next group of enemy, and through the next door, a switch will lower a super shotgun but be careful as a Hell knight will immediately spring forward as you pick it up. Kill it, then press the new switch that appears behind the lost souls to open up a path to your left, in the river of blood. Here, head right for a chaingun pickup but otherwise go left and down the stairs where more Hell knights, imps and caged shotgunners await you. Killing the enemies here will reveal a red skull key, and picking that up will spawn more Hell knights. Make your escape and gun down the nightmare imps that now patrol the staircase and go back to where the chaingun pickup was, as a door is now visible here. Go through, kill the spectres and enter the red door to be taken back to the central courtyard, where another nasty fight awaits you. Now open the red door that's below the staircase, and try not to be pinned down by the spectres and arachnotrons in the room ahead. Press the switch in the center to lower the rocket launcher and make enemies appear in the cage, after which two doors also become available to enter, as the exit door in this room requires all three keys to unlock.

The western door requires the blue key to proceed further in it, so for now, pick the eastern door. Here in the underground library, mow down the Hell knights and caged monsters and after the first door, you may dart to the right to pick up a berserk pack, and after going north, hit the switch next to the lift to unlock a way back into the central courtyard but otherwise proceed to your left and past the door to enter a large circular room, in the center of which you can see the blue skull key. Go around it while dodging the projectiles of the cacodemons outside the windows, then at the back you can find a switch that opens two alcoves containing Hell knights and ammo, and also opens the doors to the blue skull in the middle, but also activate dart throwers in the same area. Pick the key while being careful not to be hit by the darts, and once you do, the dart throwers will deactivate but more monsters will spawn in the circular room, and a crusher will activate where the blue key used to be.

Now return to the room that had the arachnotrons, and take the western door. There are many nightmare imps in here, including in red-tinted cages where they may be hard to spot, as well as demons and up to two barons of Hell ahead. Kill them and press the blue switch here to unlock the door, to reveal a large room with lost souls and many arachnotrons and nightmare imps behind grates located above you. The yellow skull key may be picked up here but first you will need to press a series of switches. There is a lot of rocket ammo in here, coupled with what you found earlier in the level, so destroy all the monsters with the rocket launcher while dodging their projectiles. Once the caged monsters are dead, arachnotrons will spawn on the ground, and it is best to switch to the super shotgun or (if you found it) the plasma rifle to avoid unnecessary splash damage against the pillars. When you kill them, take the platforms up to reach the area where the caged monsters used to be, and after pressing a switch reach the two doors at the back. Here you can reach another fairly small room where, after fighting off a few more Hell nobles and nightmare imps, lies the switch that unlocks the yellow key back in the large room. Go there and fight off more spawned in arachnotrons, and with all three keys in hand, you can backtrack to the exit door and finally unlock it and exit the level.

* The vertex count without the effect of node building is 2917.