MAP38: Liquid Facility is the sixth map of the No Hope For Peace episode of Doom 2 Unleashed. It was designed by Philnemba and uses the music track "On the Hunt" by Robert Prince.

This level cannot be completed without cheating, as a missing sector makes it impossible to reach most of the level or collect any of the keys. 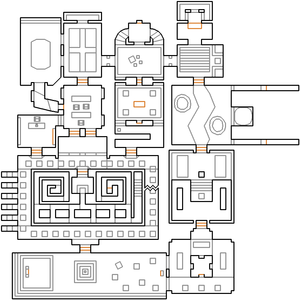 Map of Liquid Facility
Letters in italics refer to marked spots on the map. Sector, thing, and linedef numbers in boldface are secrets which count toward the end-of-level tally.

This map is not possible to beat without using the no-clipping code as a sector in the red key room is missing, blocking access to the rest of the level as well as all of the keys and secrets #2 and #3.

Due to the missing sector mentioned above, three chaingunners (things 93, 94 and 99) are placed outside the map.