MAP38: Reactor Rush is the sixth map of the All Hope for Terror episode of 2048 Unleashed. It was designed by James Caldwell (Obsidian) and uses the music track "" by Glacius.

The map cannot be completed in single-player due to Commander Keen being replaced with a new actor with considerably more health. 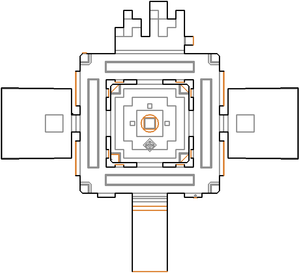 Map of Reactor Rush
Letters in italics refer to marked spots on the map. Sector, thing, and linedef numbers in boldface are secrets which count toward the end-of-level tally.

The level cannot be completed in single-player due to the Commander Keen actor being replaced with a giant heart that has 12,000 health. The level was designed so that flipping a switch starts an unseen crusher that blows up some barrels and kills a Keen, automatically opening the four metal columns in the corners (which use tag 666) and allowing the player to finish the level. However, because Keen is replaced with an actor with much more health, the new actor is not killed and the level never advances (even if it did, the level would end automatically after the heart dies).

In multiplayer, players can shoot at the reactor core to blow up a large number of unseen barrels and destroy a multiplayer-only heart which is hidden inside (this will also kill player one due to the presence of a voodoo doll hidden inside the core.)

* The vertex count without the effect of node building is 642.