MAP38: Thy Glory is the thirty-eighth map in the 2020 re-release of Doom 64 and the fifth map of its new The Lost Levels episode. It was designed by Samuel Villarreal (Kaiser) and uses the music track "Tortured Transmission". 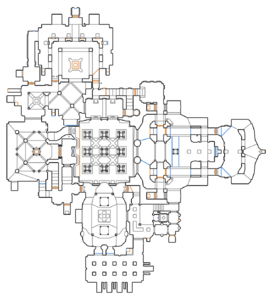 Map of Thy Glory
Letters in italics refer to marked spots on the map. Sector and Thing numbers in boldface are secrets which count toward the end-of-level tally.

Right away you are given access to a super shotgun and a chaingun as well as plenty of ammo, and you should make good use of it since you start surrounded by arachnotrons and nightmare imps, though fortunately with plenty of cover thanks to several pillars dotting the arena. Once all arachnotrons are dead, a security armor spawns in the middle. The way forward is through the river of blood, where more imps located on high ledges can hit you with their fireballs if you do not move quickly. Past the door at the end, watch out for the Hell knight and nightmare imps to your left, and go to the right to reach the imp cages you just passed. Kill any imps remaining and hit the switch at the end to lower the bars behind where the Hell knight used to be. Go there while avoiding a lost soul ambush on the way and you'll be on the terrace that housed the nightmare imps at the start, with a shotgun and a switch to its left. Press the switch to open the bars to a new section right behind the initial starting point, but once you drop down, get ready to fight more arachnotrons, nightmare imps and cacodemons that spawn in.

In this new section, once you've killed off the various foes, head right and up the stairs, going past the yellow door for now, you will see another door at the top which leads to a new room overlooking blood. Fight off the enemies and since the door on the other end is blocked off, here you can choose to directly jump onto the pedestal and use either of the four switches that you see to lower a rocket launcher and four boxes of rockets, or you can drop into the blood below, fighting a mancubus, more cacodemons and caged Hell knights, and getting a few more pickups. Even if you drop into the blood, a teleporter will then take you on top of the rocket launcher, so progression continues as usual. Once you pick up the new weapon, doors will open around you revealing more cacodemons and a pain elemental, plus mancubi and arachnotrons on the other side of a new river of blood, whilst also unlocking the blocked off door in the same room, from which more enemies will likely go through and enter the area. Since there is not much space to maneuver here, you can backtrack to the blood and fight the cacodemons there, or quickly pick them off with the rocket launcher and then focus on the mancubi and arachnotrons that remain as stationary turrets.

Go past the now-open door and you will come across a room containing the yellow skull key, although it is not obtainable just yet. Instead, go to the door to the right and past the enemies press a switch to lower a bridge where the mancubi and arachnotron sentries were. Go there and fight all the enemies that spawn, and the yellow key will now be able to be picked up. Jump down into the blood below to grab it, and a teleporter will send you once again to where the rocket launcher was, but be careful as this will now unleash several homing tracer cannons in this room, so move quickly to avoid getting blasted. Go back to the staircase where the yellow door was, avoiding more homing tracer cannons, and past the door there's a large enemy group leading to another large outdoors area filled with blood. You can reach the outdoors with a lift to your right, fighting many of the spectres roaming the area here, and the secret berserk pack you may have found earlier would be very useful for this task. There are two switches in the blood you need to press, which unlock bars located in front of the currently locked blue doors, and the second set of bars in particular has a plasma rifle you can pick up. The two switches inside summon flying foes and other monsters, and the pain elementals in particular can be quite dangerous if not taken down early, but they also lower the blue skull located in the blood, which is reachable by taking either of the two bridges leading east and killing all the enemies in the subsequent room, which unlock a teleporter leading to some platforms, and running over them will net you the blue key at last.

Now you may reach the room behind the blue doors located near you. The large room you're in now is mostly empty other than a few monsters and pickups, but there are two drops at the back that lead to a dungeon partially submerged in blood. As soon as you enter, you'll be swarmed by demons, spectres and a baron of Hell, so use your heavier weapons to dispatch them before you're surrounded. Once you kill them, a teleporter will open up, but before taking it, press the switch located down here to lift a piece of the bridge you see in front of you. To reach it, once you take the teleporter, take the door to the east and be careful of the various enemies throwing projectiles here, including another baron at the end of the bridge, and once you go all the way around and up the stairs you'll come across a switch with the red skull key in front of it. The switch makes the red key disappear and re-appear in the center of the large, previously mostly empty room, which will now be filled with dangerous enemies as soon as you pick up the key. You can use the two mancubi turrets to start infighting, but otherwise you should by now have more than enough ammo to kill everyone quickly. Take the left door now and it'll lead you to where you found the first Hell knight, and past the bars that once lowered here, you can see red bars that you can open to reach the exit. Upon stepping into the exit room, three pain elementals will spawn as a final challenge, after which you may enter the exit teleporter and finish the level.

* The vertex count without the effect of node building is 2622.