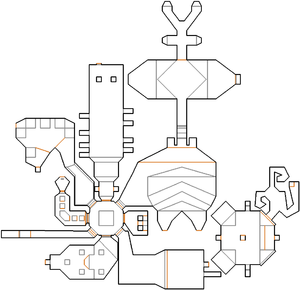 Map of Tricks and Traps
Letters in italics refer to marked spots on the map. Sector, thing, and linedef numbers in boldface are secrets which count toward the end-of-level tally.

You begin in an octagonal room surrounded by eight doors, but only three of them need to be used to finish the level. The other five are optional but lead to a number of useful items, as well as all the secrets.

Go through the south door (straight ahead of you at the start) to find a room containing a cyberdemon and several barons of Hell. Do not fire your weapons yet - wait for the cyberdemon to start firing rockets at you, as it will hit the barons and cause infighting. Once the cyberdemon or all the barons are dead, clear out the remaining enemies (use the invulnerability and soulsphere pickups in the room to help you) and grab the yellow skull key behind the cyberdemon, then hit the gargoyle switch here to open the door out of the room. (A baron may also have teleported out of the room while trying to climb the steps; it may open the door for you or be waiting for you when you leave.)

Back in the starting room, go through the north-western door flanked by yellow skull bars and follow the path round to find a red skull key - as you go through the room, the floor in front of the entrance will fall away to sludge, which is inescapable if you fall into it. When you take the red key, several platforms in the room will lower to release many imps into the room, plus two Hell knights on Ultra Violence skill level. Quickly head to the north-east corner of the room to find another invulnerability powerup and use it to kill all the enemies safely, then press the gargoyle switch in the north-west corner to raise the floor at the entrance again.

Return to the entrance room and head through the west door flanked by red skull bars. You need to run along the platforms here to the exit, but they will fall away to inescapable sludge when stepped on so you only have one chance to make it. When you reach the exit door, go through it and press the switch in the final room to finish the level.

The north door from the starting room leads to a large hallway that appears to contain only a single imp. Attacking the imp will also alert up to eight cacodemons that emerge from the holes in the walls. Behind the red pillars at the north end of this hall you will find a plasma gun and an energy cell pack, along with a switch used to open the way to secrets #2 and #3.

The north-western door from the starting room leads to a large hall that has a rocket launcher and two boxes of rockets at the north end, and two ledges with many imps at the south end. When you approach the weapon, the entrance door will shut and stairs will rise in the hall allowing the imps to step off the ledges. The west ledge has a switch that opens one of the doors blocking secrets #2 and #3, while the east ledge has a switch that opens the entrance door again.

The east door from the starting room leads to a chamber with two teleporters, which are used to enter a "monitor hall" in the south-east of the level. This hall contains secrets #4-7.

The south-east door from the starting hall leads to a room with two floors, containing many imps. Once the imps are alerted, those on the lower floor will move towards you; any that reach the wall of the upper floor will be teleported to the room entrance to try and flank you. Once all the enemies are dead, drop to the lower level to find two boxes of shotgun shells and a switch that re-opens the entrance door.

* The vertex count without the effect of node building is 522.