MAP39: At Hell's Gate X is the seventh map of the No Hope For Peace episode of Doom 2 Unleashed. It was designed by Walter Confalonieri (daimon) and uses the music track "Waltz of the Demons" by Robert Prince. 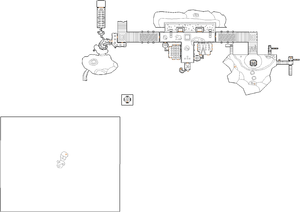 Map of At Hell's Gate X
Letters in italics refer to marked spots on the map. Sector, thing, and linedef numbers in boldface are secrets which count toward the end-of-level tally.

Grab the chaingun, backpack and boxes of bullets in front of you then go straight forward to a marble block that has one or more Hell knights on it, as well as barons of Hell on Ultra-Violence (UV) and Nightmare (NM) skill levels. Turn left at the block and head towards a door between two yellow skull markers, looking to your left for another door that you can go through to a marble step. Climb the steps here to a room containing many shotgun guys, plus two chaingunners on Hurt Me Plenty (HMP) skill level or higher - consider getting them to infight with each other to save bullets. Once the room is clear, go to the east windows and press the satyr switch between them to open a door below.

Go back to the start and head east through the door you just opened, killing an imp and chaingunner that appear in front of you, then head up the stairs to find another room full of shotgun guys - kill them all then take the yellow skull key sitting between the north windows. Backtrack to the yellow key door you saw earlier and open it, kill or run past the imps facing away from you and head down the steps to find a cacodemon guarding a rocket launcher. Open either of the doors here to find a chamber with imps and a demon, then step on the lift in the west wall to be taken down to a cavern with two or three spectres. Head north through a tunnel containing health bonuses to kill another two or three spectres, then continue north through a marble passage to enter some kind of chapel. Move between the pews with shotgun guys until you reach an altar holding the blue skull key, which is guarded by an arch-vile on HMP or higher.

Backtrack to the starting area, watching out for two cacodemons and pain elementals waiting in alcoves above the marble block, and go east from the block to a door between blue skull markers. Open it and head east past more imps to some stairs leading to a pain elemental guarding a supercharge. Continue up the stairs to a marble tower and go to its west side to find a gargoyle switch, press it then go round to the east side to find another gargoyle switch. Press the second switch to open the bars on the south side, then go into the tower to find a teleporter which will put you on a ledge above the starting area. Kill any imps that stepped through the teleporter before you, then head east until you reach the red skull key.

Drop off the ledge and return to the start point, then open the south door (between red skull markers) to reveal three knights guarding an eye switch. Press the switch to open a fleshy passage on your right which you can follow to a teleporter - after stepping on the teleporter, walk round the skull shish kebob in front of you to find a white teleporter pad which will finish the level.

Look behind the marble block north of the starting point to find an armor. You can find another armor at the bottom of the stairs past the yellow key door.

After leaving secret #1 you will be on top of a ledge near the marble tower. Drop down the hole in front of you and follow the passage down a set of stairs to a room containing boxes of bullets and shotgun shells. Open the door here to find a berserk pack on a small ledge.

* The vertex count without the effect of node building is 5815.